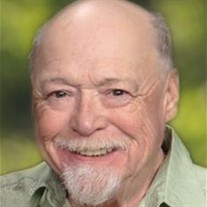 Alan King, 70, passed away peacefully on October 11, 2019 surrounded by family. Alan was born to Jeanie and Chester “Red” King. He grew up in Long Beach and, after graduating from high school, continued his education studying Child Psychology and Journalism. In 1977, he met the love of his life, his wife Diane, who he lovingly referred to as “his little witch” and, in 1980, they were married on Halloween night. A year later Alan’s only child Sarah was born. Alan and Diane moved to Tracy in the late 90’s to be closer to Alan’s mother. Alan worked for FHP and for AT&T before retiring in 2008. Alan was a kind, loving son, brother, husband, father and grandfather who had an infectious smile that could light up a room and a warm spirit that could make anyone smile. He was intelligent, genuine, funny, and had an optimistic personality. Alan had a pure heart and was always willing to lend a hand, an ear and to also give advice to others. Alan truly loved life, he enjoyed playing both board and card games, loved to bowl, collect model cars and Jewel Tea China, and spend quality time with his family. Alan is survived by his loving wife, Diane, his daughter Sarah De Sousa and her husband Alvaro, his mother Jeanie Karas, his brother Dave King and his wife Sue, his niece Jessica Murray and her husband Tim, his nephew Mike King and his wife Camille, his grandchildren Isabella, Eliana, and Anthony, his grand nieces Sophie and Mila Grace and his grand nephew Diego along with numerous cousins, nieces, nephews and extended family. Alan’s family is deeply saddened by his passing and he will be greatly missed. A Memorial Service for Alan will be held at 10:00 a.m. Saturday, November 9th 2019 at The First Presbyterian Church, 101 Berverdor Avenue, Tracy, California 95376. Alan always had an appreciation for flowered shirts and hats, especially flat caps and fedoras so please feel free to wear your favorite. Alan would love it!

Alan King, 70, passed away peacefully on October 11, 2019 surrounded by family. Alan was born to Jeanie and Chester &#8220;Red&#8221; King. He grew up in Long Beach and, after graduating from high school, continued his education studying Child... View Obituary & Service Information

The family of Alan Scott King created this Life Tributes page to make it easy to share your memories.

Send flowers to the King family.