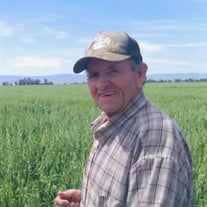 Amandio was born in Urros Portugal to Antonio and Elvira Serrano on November 20, 1935. He arrived in the US with his mother and brother Manuel, he was 11 years old. After clearing Ellis Island, the family joined his father on the family farm in Banta. Amandio was immediately put to work on the farm. Amandio attended Banta School and Tracy High School and was a member of St Bernard’s Catholic Church. Amandio attended the Manteca Fireman Ball, where he met a beautiful girl named Pat. After dating for a few years Amandio and Pat were married in 1958. They made their home on the family ranch where they raised their two children Melanie and Kenny. Along with farming Amandio had his own business, Serrano Trucking, he hauled alfalfa from Nevada serving local farmers over the years. Amandio and Pat were great dancing partners, to see them on the dance floor was a sure treat, in their earlier days they won dance competitions doing the jitter bug. Amandio loved watching his kids play ball whether it was football, softball, or hardball. He supported them in everything they did. For several years Serrano Trucking sponsored men and women softball teams. As his son went on to play for Tracy Angels Amandio was always there in the stands. When the grandchildren came all Amandio could do was love & spoil them, he always made sure to stop in Boomtown to pick up gifts for them, they would always walk the fields, the fields where he taught them how to drive at a very young age. Amandio loved Pat and his family, he loved telling jokes and making everyone laugh, he was always smiling and laughing. He loved his farm and was the most hard-working man attending to his fields until the end, he could be stubborn but extremely kindhearted. He was a 49ers and Giants fan, watching them on the TV or listening to the game on the radio in his pickup truck. Amandio loved his animals and even spoiled them too. Amandio is survived by his wife of 61 years, Thelma (Pat) Serrano; his daughter, Melanie (Dirk) Paulin of Placerville, CA; his son, Kenny Serrano of Tracy, CA, his grandchildren; Christine (Pablo) Alvarez Parker of Torrance,CA; Chelsea Serrano of Austin TX, Brian (Alisha) Parker of Citrus Heights and Lilyana Serrano of Naples, FL. Amandio was preceded in death by his parents, Antonio and Elvira Serrano, his brothers Manuel and Frank Serrano and stepmother Rosa Serrano.

Amandio was born in Urros Portugal to Antonio and Elvira Serrano on November 20, 1935. He arrived in the US with his mother and brother Manuel, he was 11 years old. After clearing Ellis Island, the family joined his father on the family farm... View Obituary & Service Information

The family of Amandio Augusto Serrano created this Life Tributes page to make it easy to share your memories.

Amandio was born in Urros Portugal to Antonio and Elvira Serrano...

Send flowers to the Serrano family.