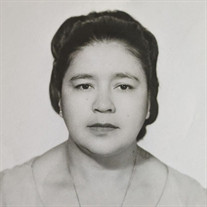 Aurelia Zamora Vallejo was born in Mexico City on November 11th, 1924. She married her husband Ignacio Vallejo at the age of 19. She became a widow at a young age and decided to come to California with her Aunt Angela Castillo at the age of 28. She often talked about how they both came to California & left their children in Mexico and how hard that was but they wanted to give them a better life. She arrived in Cardiff by the Sea and started work as a housekeeper and cook. She became a legal US immigrant on 11/18/59 and soon after moved to Tracy Ca. in search of more work and eventually made it her permanent residence and became a long life parishioner of Saint Bernard’s Catholic Church. She had a variety of jobs and while working she was able to get her 8th grade diploma from the Tracy Adult School. She was a very hard working single mother of 5 and immigrated 2 of her older children that were born in Mexico. Even though money was tight she was able to accomplish her goal of giving her children a better life. She became a proud United States Citizen in 1989. She retired when she was 74 from Tracy E Produce Corp. where she packed a variety of vegetables and fruits. In her 96 years of life she had many adventures and stories from California and Mexico. Her last adventure was a trip to Mexico City at the age of 92 to visit her three grandsons, step-sister Julia, only sister-in-law Estella, nephews, nieces and cousins whom she was very fond of. Although she had dementia she would always remember vivid parts of her trip. She is preceded in death by her father Modesto Zamora, mother and step-father Clara & Juan Ramirez, beloved son Bartholome Vallejo, beloved daughter Lucha Alvarez, beloved grandson Luis Alberto Garcia and beloved great granddaughter Leah Joy. She is survived by her children, Bertha Vallejo, Gerardo Vallejo and Maria Iniguez, Manuel Alvarez, Lulu & Mario Flores, Lisa Rivera. Grandchildren, Patty & Beto Medina, Gabby Garcia & Guillermo Carrillo, Matias Garcia, Diana Garcia, Gerardo & Lupita Vallejo, Yanet Franco, Gerardo Vallejo the third, Alma & Jason Tacderan, Erendira Vallejo, Manuel & Luisa Alvarez, Carlos & Ari Alvarez, Abraham Alvarez, Mario Flores Jr, Ilia Flores, Belicia Flores, Isaac Lopez, Isaiah Estrada, Bella Estrada, Israel Estrada and 23 Great Grandchildren. She will be missed by all her family & friends.

Aurelia Zamora Vallejo was born in Mexico City on November 11th, 1924. She married her husband Ignacio Vallejo at the age of 19. She became a widow at a young age and decided to come to California with her Aunt Angela Castillo at the age of... View Obituary & Service Information

The family of Aurelia Zamora Vallejo created this Life Tributes page to make it easy to share your memories.

Send flowers to the Vallejo family.