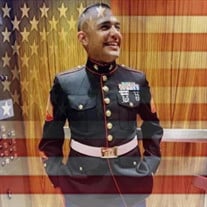 Correctional Sgt. Cesar Fuentes passed away unexpectedly on his way home from work in French Camp, CA on 1/12/2020 at the age of 32. Cesar is survived by his loving fiancée, Natalie Natividad, Merced, CA; his parents, Alberto Epifanio and Filomena Fuentes, Atwater, CA; his sister, Marlene (Fuentes) Larios; brother-in-law, Jovanni Larios, Atwater, CA; his nieces, Skylee Blaine, Vivienne Larios, and Eleanor Larios; his “bad kitty”, Huckleberry; paternal grandparents, Celestino and Emilia Fuentes, Livingston, CA; maternal grandmother, Isabel Soria, Churintzio, MX; and all his numerous aunts, uncles, and cousins that have a deep regard for Cesar. Cesar was born on 12/1/1987 in Turlock, CA. He graduated from Livingston High School in 2006. Cesar enlisted in the U.S. Marine Corps Reserve upon graduating high school in 2006 and served for 12 years, including two tours of duty in Operation Iraqi Freedom (2008-2009) and Operation Enduring Freedom (2011-2012). He served as a Marine Corps Martial Arts Black Belt instructor and a Combat Marksmanship Trainer. Cesar was awarded a Humanitarian medal for his time in Myanmar, Burma for assisting in shipment of supplies to the Burmese after a devastating cyclone hit the island in May 2008. He was honorably discharged at the rank of sergeant. Cesar was a six year veteran of the San Joaquin County Sheriff’s Office and was recently promoted to sergeant. Upon graduating from the sheriff’s training academy, Cesar earned the Dighton Little Award from his peers and the Christopher Serpa Award for overall outstanding performance. Cesar served on the Custody Emergency Response Team, CERT, for five years as a Team Leader. Cesar was an avid fisherman and loved taking his boat out. He enjoyed shooting and riding. He was a proud Marine, a devoted companion to all his friends and family. Cesar left a profound impact on all that crossed his path. He will always be remembered by his infectious smile.

Correctional Sgt. Cesar Fuentes passed away unexpectedly on his way home from work in French Camp, CA on 1/12/2020 at the age of 32. Cesar is survived by his loving fiancée, Natalie Natividad, Merced, CA; his parents, Alberto Epifanio and Filomena... View Obituary & Service Information

The family of Cesar Alberto Fuentes created this Life Tributes page to make it easy to share your memories.

Correctional Sgt. Cesar Fuentes passed away unexpectedly on his...

Send flowers to the Fuentes family.