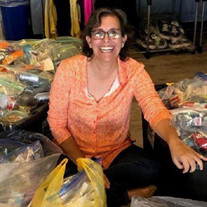 Cynthia “Cindy” Marie Silligman, 54, died on July 21, 2020, due to complications during surgery at Doctors Hospital in Manteca, CA. Cindy Silligman was born January 7, 1966, to Ovide and Linda Guesnon in the San Francisco Bay Area, their eldest child. Cindy grew up in Fremont and spent her early years involved in scouting, church, and in the community. She was active in various clubs and teams at Irvington High School where she graduated in 1984. She is survived by her three children Kasey Silligman (23), Kyle Silligman (21), and Ryan Silligman (15). She is also survived by her two loving parents and six siblings, Paul, Elizabeth, Deanna, Barbara, Dennis, and Patricia, their spouses, and numerous nieces and nephews, as well as a large extended family. Cindy was a lifelong member of the Catholic Church, faithfully practicing as a parishioner of St. Bernard’s Parish in Tracy, CA. She was Confirmed and chose the name of St. Teresa of Avila in November 1983 and saw all three of her children do the same. She loved to set up decorations in her home, marking the liturgical season or a particular feast day. Cindy was a true Christian, following Jesus’ teachings and led by example. With a heart of gold, she was always thinking of others, how she could help them, and was very generous with her time and many talents. She was rare in that she could achieve so much abundance with so little and would give you the shirt off her back, or sew a new one, to anyone who was in need. Even when facing financial hardship, Cindy and her family continued to provide homeless care packages year-round. This was because she always knew, no matter what, there was someone who had it worse and needed their help. Cindy always was an Educator by profession. From an early age, she always knew she wanted to be a teacher. She received her Associates in Early Childhood and Special Education. She then became a preschool teacher and had also worked in homes for special needs adults. She took a break to be a mother, but for her, this also included the decision to homeschool all three of her children. Education was always a priority in the upbringing of her children. She also demonstrated this to them through her pursuit of her own continued education. Prior to her passing, Cindy was in the process of her master’s program for special education and had been hired as a 3 rd grade teacher for St. Bernard’s School. Outside of her family, Cindy loved everything Scouting and Aquatics. She was on her school swim team in High School. She became a Sea Scout which allowed her to continue her love of scouting, which started when she joined Girl Scouts while exploring aquatics and sailing. Cindy went on to become a scout camp Lifeguard and Aquatics Director with the Boy Scouts. Little did she know, she would continue that role throughout life. Her Scouting career was extensive both in the Girl Scouts and Boy Scouts, but she never advertised it. Cindy Silligman was a tireless supporter of youth in our communities. For some she may have been a leader, mentor, or even taught them how to swim. For others, Cindy may have sewn the costume for their dance recital or cooked meals for them on a weekend campout. Cindy will be remembered by all who had the pleasure of meeting her. Her personality was infectious, as was her smile, and will live on in the many lives she touched. With Cindy, you knew, she loved you too much not to kick your butt. That simple act of love resonated with the countless people around the country and world who had the privilege of calling her Mom, Daughter, Sister, Cousin, Friend, and Leader. Information about the Services: Visitation at Tracy Memorial Chapel from 3-6 pm, followed by a Vigil Rosary at 6:30 pm on Wednesday, August 12. There will be a funeral mass at St. Bernard’s Holy Family Center at 10 am with an interment to follow on Thursday, August 13. Due to current health code regulations, seating is limited. However, both services will be live-streamed and recorded for viewing. This information will be shared via social media. Find all the Facebook live links at https://www.facebook.com/CindySilligmanMemorial Livestream Links. Rosary: Mass:

The family of Cynthia Marie Silligman created this Life Tributes page to make it easy to share your memories.

Send flowers to the Silligman family.