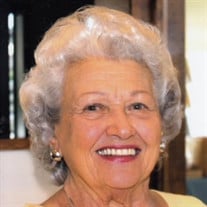 Darlene Marie Canale Keith: December 25, 1927 - October 12, 2021 aka: Da Born and raised in Banta, California Darlene has been reunited with her heavenly family and friends. Darlene was a great story teller and loved to recount tales of growing up the constable’s daughter, playing in the family store, trips to Santa Cruz, friends, boys, adventures to Baja, fishing on the Klamath, deer hunting and camping trips with her husband, brother and sister-in-law. She was a collector of things and every thing had a story! As a young woman, she worked for Allstate and lived in San Francisco, Menlo Park and settled in Newark where she and her husband, John Calvin Keith, aka: Cal moved in the 1960’s. She was a devoted mom, wife, PTA member, polling place volunteer, Avon representative and was like a second mom to the neighborhood kids in Newark. Darlene and Cal retired to LaPine Oregon in the 1980s, making new friends in their camper, snowmobile club and at The Moose. She joined the Elks lodge with her long time boyfriend, Jack Pearson, and they traveled to rodeos all over the US, enjoying their yearly trips to the Pendleton Round-Up. In more recent years she was a member of the LaPine Band of Sisters and supported local veteran’s activities. She loved small town life and remained in LaPine until November of 2020. She is survived by her son Kevin Keith (Christina), grandchildren Christopher and Benjamin Keith, brother Corky Canale (Nancy), nephew Randy Canale (MaryLou), great nephew Vince Canale, great niece Jacquelin Canale Simmons (Jason), great great nephew and niece Rhett and Allicen Simmons, cousin Carlotta Perez, Brother-in-law Gene Keith, sister-in-law Shirley Keith, as well as countless extended family and amazing friends in Tracy, Newark and LaPine. She was preceded in death by her husband John Calvin Keith (1991) and her parents Ben Canale (1971) and Alice Hammond (1993), boyfriend Jack Pearson (2011). If you are moved to do so, please make a donation in Darlene’s honor to your local veteran’s organization and raise a glass of red wine or beer (over ice, of course) to toast a beautiful life. A graveside service will be held on Saturday, October 30th at 10:30am at Schulte Memorial Park, 501 East Schulte Road.

Darlene Marie Canale Keith: December 25, 1927 - October 12, 2021 aka: Da Born and raised in Banta, California Darlene has been reunited with her heavenly family and friends. Darlene was a great story teller and loved to recount tales of growing... View Obituary & Service Information

The family of Darlene Marie Keith created this Life Tributes page to make it easy to share your memories.

Send flowers to the Keith family.