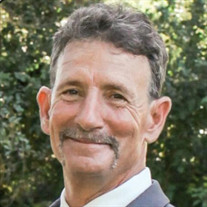 On Saturday, October 9, 2021, David Jon Dahlheim, loving husband, father, grandfather, son, brother, and friend passed away at the age of 63 in Tracy, CA. David (Dave) was born on April 9, 1958 in Glendale, CA to Donald and Carol Dahlheim. Dave grew up in Pleasanton, California with his older brother, Matt, younger brother Dan, and younger sister Cathy. He loved playing sports, playing music, and being outdoors. Dave was competitive, growing up he was on the wrestling team and diving team. He also enjoyed water skiing, snow skiing, trap shooting, and a round of golf or darts with friends. However, what he loved most of all was being a father. He was proud to be a softball dad, help raise animals for 4-H projects, and watch his little girl grow up, get married, and to meet his grandson, Parker. Dave married his wife Jennifer Kay Perry on October 18, 1984 and together they raised their daughter, Katelyn. Dave and Jennifer celebrated 37 years together. They loved spending summers on the Delta, weekends on the softball field, and vacations in Hawaii. Professionally, Dave attended Arizona Automotive Institute and operated Niles Auto Service before completing a degree in Political Science from California State University, Hayward in 1986. His plan was to become a lawyer, until he fell in love with tractors and heavy machinery and started his own tractor service business, Pleasanton Tractor Service. After many years of owning his own business, Dave took a job working for the City of Tracy where he retired after 18 years. Dave was best known for always being willing to lend a helping hand (or tool) and being everyone’s friend. You could always find him working on something with someone. Dave was preceded in death by his sister Catherine Dahlheim. He is survived by his wife Jennifer Dahlheim of Tracy, CA, daughter Katelyn Dahlheim Hardman and husband Justin or Portland, OR, grandson Parker, his parents, Don and Carol Dahlheim, brothers Matt Dahlheim, Dan Dahlheim and wife Sarah, as well as many loving cousins, nieces, nephews and friends

The family of Dave Dahlheim created this Life Tributes page to make it easy to share your memories.

Send flowers to the Dahlheim family.