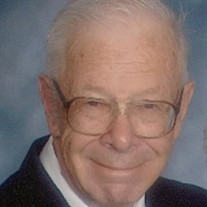 Davey Lee Shimp was born January 23, 1930 in Byesville, Ohio to Harry and Lela Shimp. In December of 1946, at age 16 he entered the US Army, serving as a medic at the Presidio of San Francisco for 18 months. He then returned to Byesville Ohio where he graduated from Byesville High School in 1949. Sensing the call of the Lord in his life to be a pastor, he attended Baptist Bible Institute of Cleveland and then continued to Piedmont Bible School in Winston-Salem, North Carolina, graduating with a Bachelor of Theology in 1955. He worked as a Merchant Marine on the Great Lakes to pay his way through Bible College. He met Shirley Beck at Baptist Bible Institute and married her on September 1, 1956 in East Cleveland, Ohio. He spent his life following God's call to ministry. He served as Pastor to Stanleyville Community Church in Whipple, Ohio, Fairfield Baptist Church in Thurston, Ohio and Litchfield Baptist Church in Litchfield, Ohio, where he served for 53 years.He served in the Hebron Association of Regular Baptist Churches. He was active in community organizations and was well known and loved in the community. In 2016 he and his wife moved to Tracy, California to be with family. He was a member of Crossroads Baptist Church and served on the Mission TEAM. Davey went home to be with the Lord on April 12, 2021 after prolonged illness. He is survived by his Daughter and Son-in-Law, Tim and Susan Heinrich and four granddaughters Janae, Samantha, Alyssa and Talitha. He was preceded in death by his wife Shirley in January 2020, his parents Harry and Lela, his brother Bob and his sister Nancy. A celebration of life service for Davey and Shirley is planned for June 2021 in Litchfield, Ohio. The family requests that in lieu of flowers, gifts in his memory may be sent to Litchfield Baptist Church, Hospice of San Joaquin, or Crossroads Baptist Church Building Fund.

Davey Lee Shimp was born January 23, 1930 in Byesville, Ohio to Harry and Lela Shimp. In December of 1946, at age 16 he entered the US Army, serving as a medic at the Presidio of San Francisco for 18 months. He then returned to Byesville Ohio... View Obituary & Service Information

The family of Davey Lee Shimp created this Life Tributes page to make it easy to share your memories.

Send flowers to the Shimp family.