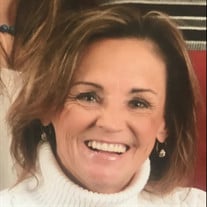 DeeAnna Perry, 54, resident of Tracy, CA passed away September 5th, 2019. She was born in Sonoma, CA on February 22nd, 1965 to Guy and Madeline Ruth Smith. DeeAnna grew up in Manteca, Ca and attended Manteca High School. While attending High School she worked at Kentucky Fried Chicken. Soon after graduation, she received a job at the Sharp Army Depot, then later transferred to the Defense Distribution San Joaquin Tracy Depot where she ultimately held the position of Supervisor. DeeAnna retired from the Defense Depot in Tracy and was able to enjoy being a mother and homemaker. She was a wonderful loving caring mother, wife, and friend to many. She had a love for all animals, especially her dog Maddie Ann and her ducks. She had an avid love of the water and prided herself and many others with her swimming abilities. She swam like a fish. She never missed the opportunity to express the love she had towards people and was always there with a helping hand. Many throughout her small community of Banta, remember DeeAnna as always going out of her way, to bring them a little gift when she saw something that reminded her of her friends. These gifts will be cherished and will be a reminder of the beautiful soul she was. DeeAnna is survived by her husband, Joe; three children, Adam (Kobi), Wyatt (Hailey), Mary Joe; and Four stepchildren, Jennifer (Sterling) Wright, Julie, Joseph (Judie), Jeanine (Matt) Borges. She had 19 step grandchildren. She is also survived by her half-sister Joni McCoy, her Aunt Joanne Overton, and cousin Patti Dannels, and many other extended family members. She was preceded in death by her father Guy Smith, Mother Madeline Ruth Smith, Brother Tommy Fisher, Uncle Paul Overton, and Aunt Daisy Pickle.

The family of DeeAnna Perry created this Life Tributes page to make it easy to share your memories.

Send flowers to the Perry family.