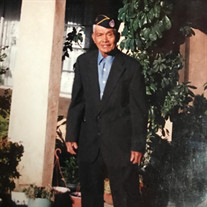 Desiderio “Pilo” Desamito Patague, passed away on Thursday, January 09, 2020 in Mountain House, California. After 97 years of life filled with love and adventure, he died peacefully at home surrounded by loved ones. Desiderio was born on Febuary 11, 1922 in Santa Catalina, Binalonan, Pangasinan Philippines to Pedro Patague and Rita Mercedes Desamito. He was the oldest of four siblings: Alfredo (deceased), Paulina (deceased), and Bernabe (deceased). He enjoyed aerobic activities and participated in Track & Field and Pole Vaulting. He was an avid fan of boxing and very much enjoyed watching reruns of his favorite matches. After graduating from High School, Desiderio became a recognized guerrilla and fought alongside the Philippine and US Armed Forces during World War II. After the war, he married his first wife, Felicidad Ingaran (deceased) at Binalonan Pangasinan in 1944. They were blessed with two children, Erlinda Patague-Bibat and Godofredo Patague. In 1948, he took a chance for a better life by working in Guam. He worked at the Guam Thrifty Market for 12 years and was recognized for his hard work. Upon his return to the Philiippines, Desiderio met his second wife, Herminia Cabilitasan Sr. They lived in Santiago City, Philippines where they were blessed with seven children: Carolina Patague-Dizon, Wilfredo Patague (deceased), Herminia Patague-Maningding, Enrico Patague (deceased), Jose Patague, Juanita Patague-Jimenez and Josefina Patague-Budlong. On December 18,1992, Desiderio immigrated to the United States. Years after his migration, he was able to petition his family to join him in the United Stated. Today, he serves as an inspiration to his twenty-seven grandchildren and twenty-four great grandkids. He taught lessons in the form of songs and stories. He was a great pillar to his family, a loyal friend and a hero to his grandchildren. He will be greatly missed. His journey in this physical world has come to an end. Now, a new life with his Creator awaits him. To celebrate his life, a funeral service will be held Thursday, January 16, 2020 at 10:45 AM in St. Bernard’s Catholic Church, Tracy, California. Reverend Fr. Delfin Tumaca will officiate the service. A viewing will take place Saturday, January 18, 2020 from 12:00 PM to 7:00 PM at Tracy Memorial Chapel. A Rosary Prayer will start at 2:00pm officiated by Reverend Mr. Peter Ryza. "Grandpa, you lived a life worth celebrating. You will always have a place in our hearts."

Desiderio &#8220;Pilo&#8221; Desamito Patague, passed away on Thursday, January 09, 2020 in Mountain House, California. After 97 years of life filled with love and adventure, he died peacefully at home surrounded by loved ones. Desiderio was... View Obituary & Service Information

The family of Desiderio "Pilo" Desamito Patague created this Life Tributes page to make it easy to share your memories.

Send flowers to the Patague family.