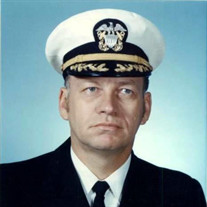 Commander Earl Fredrick Gustafson passed away at home on July 24, 2020, from natural causes. Born Dec. 21, 1925 to emigrant parents in Rockford, Ill, he grew up there and in rural Minnesota. After graduating from Ogilvie High School, he enlisted in the Navy at Minneapolis in 1948 and reported for recruit training at Great Lakes, Ill. Following boot camp he underwent aviation rate training at Millington, TN and Lakehurst, NJ. His first duty assignment was Naval Air Station, Los Alamitos, CA. During the Korean War, he served onboard USS Cape Esperance [CVET-88] transporting planes and other cargo between the West Coast and the Far East, and USS Salisbury Sound [AV-13], a seaplane tender operating out of Okinawa and Iwakuni, Japan. Earl then returned to Lakehurst for additional training and subsequently was ordered to staff support in the Aerological Engineering Department at Naval Postgraduate School, Monterey, CA. His next assignment was with Naval Support Force Antarctica based in Washington, D.C. He twice deployed to the Antarctic, mainly onboard USS Arneb [AKA-56] but also on icebreakers and ashore at McMurdo Station as part of Operation Deep Freeze. This duty was followed by tours at Fleet Hurricane Forecast Facility, Miami, FL and Fleet Weather Facilities in London, England and Norfolk, VA. Returning to sea, he then served onboard USS Okinawa [LPH-3] with an initial deployment as part of the Amphibious Ready Group in the Caribbean area. During most of 1967, the ship deployed to Southeast Asia and later participated in the recovery of Apollo 8. After a tour at Fleet Weather Central, Pearl Harbor, Hawaii, Earl again returned to sea onboard USS Oriskany [CVA-34] and made two deployments to Southeast Asia. In late 1973 he reported as Officer in Charge, Naval Weather Service Environmental Detachment, Moffett Field, CA with additional duty as Staff Meteorologist, Patrol Wings, Pacific. He retired in 1978 as a full Commander after 30 years of service. Earl married Floy Jeanne Schonberg (a former Marine) in 1953. They had lived near each other in Minnesota and went to the same high school. They raised 2 children while moving around the world with the Navy. After Earl’s retirement, they moved to Arroyo Grande, CA, eventually building their dream house that he designed. While living there, Earl was active in the Military Officers Association of America (MOAA), the California Council of Chapters MOAA (Chapter President, Area 3 Director and Interim Secretary), Fleet Weather Reserve, Naval Weather Service Association, Toastmasters, the local Democratic Club and the Austin Healy Club. He volunteered at the Retirees Center at Vandenberg AFB in Lompoc, publishing their newsletters for many years. He also published the newsletter for CALMOAA. Earl and Floy traveled extensively around the United States and abroad, in the Far East, Australia, and New Zealand. They spent 2 summers exploring the Yukon Territory and then Alaska, in their camper. In 2010, when Floy became ill, they moved to Tracy to be closer to family. She passed away in 2013, just before what would have been their 60th anniversary. Earl was lucky enough to find love again. He met Martha Moffett at the Widowed Persons Group that they both attended. They were married on June 2, 2015. They enjoyed meeting with their friends and going to the Senior Center to listen to music. Baseball was a fun time at their house: he was a SF Giants fan and she like the Oakland A’s. They also enjoyed watching old movies. Earl and Martha were devoted to each other. Earl is survived by his daughter Valerie Dubie (Chuck) of Tracy, his son Chris Gustafson (Sandra) of Bodega Bay, his grandson Phillip Dubie (Elizabeth), his granddaughter Meghann Dubie, his great-grandchildren; Michael Dubie, Katherine Dubie, Rebecca Dubie and Helen Dubie; his wife Martha Moffett, her children Nickie Utvick of Tracy and Steve Moffett (Sylvia) of Antioch, her grandchildren Victoria Utvick (Zach), Megan Libenson (Paul), Thomas Utvick, Tim Moffett (Allie), Reese Moffett and Kirra Archuleta; her great-grandchildren; Olivia Libenson and Leo Libenson. Tracy Memorial Chapel is handling the arrangements. Earl will be cremated and inurned at the Sacramento Valley National Cemetery in Dixon at a later date. He will receive full Military Honors.

Commander Earl Fredrick Gustafson passed away at home on July 24, 2020, from natural causes. Born Dec. 21, 1925 to emigrant parents in Rockford, Ill, he grew up there and in rural Minnesota. After graduating from Ogilvie High School, he enlisted... View Obituary & Service Information

The family of Earl Fredrick Gustafson created this Life Tributes page to make it easy to share your memories.

Commander Earl Fredrick Gustafson passed away at home on July...

Send flowers to the Gustafson family.