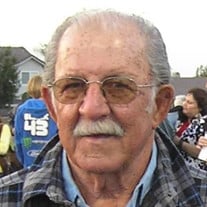 Eugene Wallace Sparks, Jr., went by the nickname of Sonny. He was born in Walla Walla, Washington on January 22, 1938. He died on his ranch in Tracy, California on April 15, 2020, at the age of 82. He probably thought it was fitting and pretty funny to die on tax day. He certainly complained about paying them every year! He was preceded in death by his parents (Freda Mohar and Eugene Sparks Sr) and his brother (Chuck). He was also preceded in death by his wife, Shirley, and two infant children, Gary Anthony and Karen Marie. Dad and Mom met in middle school in San Lorenzo, California. They dated most of that time. Just before Christmas break of his sophomore year of high school, his mother was called in to meet with the principal and was told that the school would be better off without Dad and not to send him back in January. He turned 17 a month later and his mother signed the papers so he could join the US Navy. He spent several years on the aircraft carrier Bon Homme Richard and loved his time and travels with the Navy. He worked at quite a few different jobs until he settled into driving a truck and became an owner operator. They also began to raise beef cattle. Dad and Mom were always involved in our 4-H and FFA endeavors. Janice showed steers and Debbie showed steers and lambs at the Alameda County Fair. In the late 1970’s, they bought their ranch land. It was an empty piece of property when they bought it. They built the corrals and pole barn first. Then they had a house moved up there and, finally, were able to live on their own ranch. They raised cattle and began raising squabs. Dad retired from trucking in 2000 and focused on the cattle and squabs while Mom continued to work for a bit longer. Debbie’s older kids remember finding the baby mice and snakes in the squab pens and riding the 4-wheeler around the ranch. In 2004, Mom died after a year long battle with breast cancer. Dad just could not face raising the squabs on his own so the pens and squabs were sold soon thereafter. He then sold the cattle and rented his ground out to other cattlemen. Dad decided he needed something to do so he moved a modular house onto the ranch and worked on it. Once it was ready, he rented it out. He added a second modular in 2014 or so. When it was ready, he rented it to a couple with a young daughter. Having Jimmy, Melanie and Kaylee move in there was great all the way around. They got to live on a ranch and bring their horses. In return, Jimmy has taken on helping around the ranch, helping dad when he needed and they have all been there for all of us. We were lucky this last go-round on the first house and have some terrific people in there also. Joe, Jennifer, Dalton and Amelia have been very helpful and very kind to dad also. On Easter Sunday this year, they all decided they were going to have an Easter egg hunt in Dad’s backyard so he could watch their kids all hunting eggs. This past year has been rough on all of us. Dad was in and out of the hospital last spring and summer. When he was brought home from the hospital for the last time, all he wanted was to come home to die on the ranch. The doctors expected he would survive 3-4 weeks, maybe up to 2 months. He decided he wasn’t going to do anything on the doctors timetable so, with the help of his wonderful caregivers, he survived 8 months. During that time, they went to Starbucks, West Valley Mall, Golden Corral and to check out the houses in Tracy Hills. We took him to Black Oak casino. His caregivers were fantastic. We cannot thank Pam, AJ, Gina, Arnel, Rosemarie, Mark, Aileen and Hurley enough for their care of dad. His hospice nurse, Khanh, was fantastic as was everyone we dealt with at Vitas Hospice. Towards the end, he talked to Mom more and more when he slept. We like to think she was helping ease his way to her. He is survived by his daughters, Janice (Jeff) Gee of Gilmer, Texas and Debbie (Robert) Leal of Escalon, California. He has seven grandchildren, Tawny Bewley, Bo (Ginger) Gee and Keith (Jenny) Gee of Texas, and Rachel (Noah) Russell, Robert Jr., Sarah and Frank Leal, all of California. He is also survived by eight great-grandchildren (Rheanna, Baylee, Bryce, Morgan, Owen, Hunter, Kooper and Karter), all of Texas. He will be missed by his sisters, Donna and Sid Phelps and Cheryl Mohar, and by his brother-in- law and sister-in-law, Doug and Diane Clouse. His nieces and nephews will miss him greatly. They all wanted to be a cowboy or a truck driver because of “Uncle Sonny.” He will also be missed by his special friend, Inger Reynolds. A memorial service is planned for sometime this fall. Dad was interred in the Tracy Public Cemetery with Mom, Gary and Karen. If you wish, please make a donation to Dad’s favorite charity, St. Jude Children’s Research Hos- pital at www.stjude.org. Funeral arrangements were made with the help of Tracy Memorial Chapel, Condolences may be expressed at www.tracymemorialchapel.com.

Eugene Wallace Sparks, Jr., went by the nickname of Sonny. He was born in Walla Walla, Washington on January 22, 1938. He died on his ranch in Tracy, California on April 15, 2020, at the age of 82. He probably thought it was fitting and pretty... View Obituary & Service Information

The family of Eugene Wallace Sparks created this Life Tributes page to make it easy to share your memories.

Eugene Wallace Sparks, Jr., went by the nickname of Sonny. He...

Send flowers to the Sparks family.