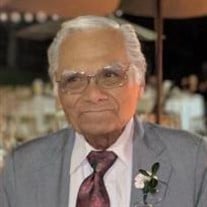 Felix Santiago Landaverde Escobar Sr. passed away peacefully, surrounded by his children, grandchildren, and great grandchildren, on February 22, 2022 at seven in the evening, at the age of 94 in his home in Tracy, California. He was born May 3rd, 1927, in Sonsonate, El Salvador, to Casimiro Landaverde and Hipolita Escobar de Landaverde. He was the fifth oldest child out of fourteen siblings. Out of all his siblings, he has two surviving sisters, Martha and Lidia. In his younger years, he lived a majority of his life in the city of Sonsonate and then studied in San Salvador. At the age of 25, he obtained a Master’s Degree in accounting. In December of 1954 at the age of 27, he married the love of his life Maria Elba Molina. He had four children; Julio, Patricia, Carol, and Felix Jr. . Through the years, he was a successful entrepreneur with many businesses. In 1989 at the age of 62, Felix and his wife moved to California to be closer to their children. He had a total of twelve grandchildren and ten great grandchildren. In 2018 at the age of 90, Felix lost his beloved wife, Maria. They were married for sixty four years. Felix had a deep love for all music, but in particular enjoyed orchestra music, as it brought him back to his more youthful years. He would sit in his recliner and spend hours just listening and reminiscing. If he wasn’t listening to music, he would be watching movies. He loved driving in his gold Mercedes E-320, chauffeuring his wife around and eating at their regular spots where they were well known and loved “regulars” or thrift store shopping for antiques, collecting VHS tapes. Felix was a Servant of God. He passionately lived by the word of God. He was a member of the Seventh Day Adventist Church. He loved discussing the Bible with others. If any of his grandkids asked him anything about the Bible, he would glow proudly and share endlessly his love and wisdom. You would find him preaching at the Spanish Seventh-Day-Adventist Church on the weekends. He would always encourage his kids to study the word of God and the importance of attending church on a daily basis, and to never steer away from God. Felix was a loving son, brother, father, a giving grandfather, amazing uncle, a true friend, and most importantly a man of faith, a loyal servant of God who believed in the great promise of God, the second coming, promising eternal life to whoever believed in him.

Felix Santiago Landaverde Escobar Sr. passed away peacefully, surrounded by his children, grandchildren, and great grandchildren, on February 22, 2022 at seven in the evening, at the age of 94 in his home in Tracy, California. He was born May... View Obituary & Service Information

The family of Felix Santiago Landaverde created this Life Tributes page to make it easy to share your memories.

Send flowers to the Landaverde family.