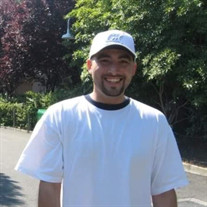 Frank Lorenzo Alvarez Jr. passed away unexpectedly on Saturday June 13, 2020, at the age of 42. He was born in Tracy, CA to Frank & Yolanda Alvarez on December 20, 1977 at Sutter Tracy Community Hospital. Frankie who was also known by close family & friends as "Spanky". He gained the nickname because as a baby he strongly resembled the character Spanky from The Little Rascals. Frankie lived & went to school in Tracy, CA. He is a 1996 graduate of Tracy High School. From an early age Frankie's love for sports (especially baseball & soccer), fishing, breakdancing & spending time with family was apparent. He was a loyal Chicago Bears & LA Dodgers fan since he was a young child. He played in the Tracy Babe Ruth Baseball League for many years throughout his childhood, receiving numerous awards & trophies for his accomplishments. Music has also always been a huge component to Frankie's life. In high school his love for hip hop culture strengthened further & he became a b-boy. He quickly earned the nickname "Swift" & belonged to a local b-boy crew called "Mad Action" for about 5-6 years. Fishing & camping was always a favorite thing for him to do. He enjoyed these things throughout his whole life. That was his happy place, in & around water! In 1998 he began his career as a Journeyman Painter & continued to do so until he passed. He received multiple certifications, always wanting to learn & get better. He took pride in his work & was a perfectionist. His attention to detail is what made him stand out. He received praise & recognition from many reputable local body shops he worked with throughout his career. Above all, Spanky was a family man. He believed family is everything & always tried to be there for his. He enjoyed making people laugh. His witty & charismatic personality could make anyone crack a smile. He is preceded in death by his father, Frank Alvarez Sr. He is survived by Jessica "Jessi" Alvarez, his loving wife; his mother Yolanda Alvarez; his son Thomas "Tommy" Alvarez; his twin daughters Taylor & Gabriela "Gabby" Alvarez; his sisters Trisha Machlachlan & Kandice Banda; his brother Devin Alvarez; his grandma Mary Perez; as well as many nieces, nephews. Services for Frankie will be Friday June 26th, 2020 at 1pm at PST at Tracy Memorial Chapel located at 5 W. Highland Ave in Tracy. Due to limited seating available it will also be live streamed. Anyone attending must wear masks. The family would like to thank everyone for their cards, flowers, food, prayers & just all around love & support they have received. They are also kindly asking for privacy during this difficult time. Frankie "Spanky" Alvarez Jr. Our Beloved Son, Dad, Husband, Brother, Grandson, Nino, Uncle, Nephew, Cousin & Friend. He will be missed by many but he will never be forgotten. So when you start to feel sad, stop & remember him for all that he was to all that loved him so much. He would want you to not cry because it's over but to SMILE because it happened! Fish in Paradise Spanky.........We love you.....until we meet again.

Frank Lorenzo Alvarez Jr. passed away unexpectedly on Saturday June 13, 2020, at the age of 42. He was born in Tracy, CA to Frank & Yolanda Alvarez on December 20, 1977 at Sutter Tracy Community Hospital. Frankie who was also known by close... View Obituary & Service Information

The family of Frank Lorenzo Alvarez Jr created this Life Tributes page to make it easy to share your memories.

Send flowers to the Alvarez family.