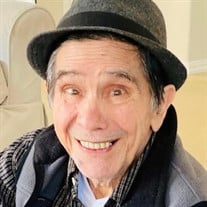 Gustavo Carbajal Garcia of Chihuahua, Mexico passed away on 3/24/2022, at the age of 85. He died peacefully in his sleep at home in Tracy, CA after several years of declining health related to progressive Alzheimer's Dementia. Gustavo was born in Guadalupe, D.B. Chihuahua, MX on Feb 15th, 1937, to father Jesus Garcia Armendariz and mother Martina Carbajal Varela. He was the eighth of eleven surviving children. His siblings were Portfirio, Jesus, Socorro, Rodolfo, Consuelo, Belia, Gloria, Juan, Margarita and Armando. Gustavo didn’t have the opportunity for much formal education- he was sent home from school in the 3rd grade because he didn't have shoes. Gustavo was back and forth in the US since early childhood. His father Jesus worked as a farm laborer in Texas as part of the US Bracero Program of 1942. He shared a memorable story of secretly following his dad to the train station and running after and jumping on a moving train heading for Texas. Well into the trip, to his fathers great surprise, he made his presence known. He insisted on helping his father work in the cotton fields. At that point his father couldn't object. He was eight. With his prowess at jumping trains, his friends later gave him the enduring nickname, “La Liebre” (The Jackrabbit). To help his family survive, he continued to work various jobs, including as a shoe-shiner in Juarez. At age 18, he obtained a job at a printing press, helping to arrange letter blocks and thus informally learning to read. In the mid 1960's, Gustavo came to the California Bay Area to and briefly lived with his sister Gloria. He found good paying work as a construction laborer. In 1966, while visiting his mom in Juarez, MX he met Esperanza Herrera Nevarez. A romantic relationship rapidly ensued and they married in 1967. They briefly rented a home in Mountain View then moved to the Niles district of Fremont, CA. While there they had five healthy children in short succession. With hard work and perseverance, they eventually bought a home in Fremont and raised their happy family. Gustavo was a loving father who took care of his family. He loved children. He was a kind and gentle soul with a calm demeanor. He was amicable and a friend to many throughout his life. Despite his humble origins he had many accomplishments of which his family is grateful and proud. He will be missed, but he will remain alive with fond memories in all our hearts. Gustavo was preceded in death by his parents. He is survived by his children Gustavo, Antonio, Esperanza, Socorro, Martin; grandchildren Brandon, Nicholas, Samantha, Jacob, Jerrett, Dylan, Issa; great-granddaughter Mariah, and great-grandson Damien.

Gustavo Carbajal Garcia of Chihuahua, Mexico passed away on 3/24/2022, at the age of 85. He died peacefully in his sleep at home in Tracy, CA after several years of declining health related to progressive Alzheimer's Dementia. Gustavo was... View Obituary & Service Information

The family of Gustavo Carbajal Garcia created this Life Tributes page to make it easy to share your memories.

Send flowers to the Garcia family.