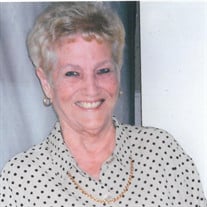 Hazel Rosettia Laffoon McGraw, aged 88, passed away on October 24, 2020 in Carson City, Nevada. She was born to Lawrence and Jennie Mae Cowan in Blackburn, Oklahoma on March 9, 1932. After her mother’s death when she was just 6 months old, Hazel’s father later married Mary Cowan who loved and raised her and her older brother, Kenny, as her very own. She married Virgil Laffoon in 1949. First in Oklahoma then moving to California, they raised 4 children; Tom, Linda, Brinda and Lee. Since growing up on a farm in Ponca City, Oklahoma with the obligations of performing the tedious farm-life tasks and being shuffled from family member to member until her father remarried, Hazel learned an appreciation for the people and things around her and became passionate about her roles of homemaker, wife and mother. She was fiercely supportive of her family and friends, always lending a hand or an ear whenever it was needed. When her children were grown, Hazel worked as a beautician, as she loved to help others feel good about themselves. She also worked at Laura Scudders, retiring from there after 10 years of loyal service. Hazel later married Gene McGraw in 1985. She and Gene would often enjoy one another’s company, traveling the states with their poodles, Didi and Fifi. Hazel is survived by her children: Tom (Angela Laffoon) of Livermore, CA; Linda (Andy Grilli) of Jackson, CA; Brinda (Philip Schloss) of Carson City, NV and 9 grandchildren: Angela Nava, Melissa McKenzie, Kevin Liang, Tony Gouvaia, David Gouvaia, Rebecca Lepez, Nathan Schloss, Rachel Schloss and Jenny Faulkner. She is also survived by 17 great grandchildren and 1 great, great grandson. She is preceded in death by her parents, Jennie Mae, Lawrence and Mary Cowan; her siblings, Lawrence, Kenny and Velda Cowan; her husbands, Virgil Laffoon and Gene McGraw; her son, Lee Laffoon; and her grandson, Dwayne Laffoon. Hazel will be missed immensely. Services will be held at Tracy Memorial Chapel, 5 West Highland Avenue, Tracy, CA on Monday, November 9, 2020 at 10 am. Burial service and refreshments will follow. Due to our current circumstances surrounding COVID19, please RSVP to Linda at (209) 217-8484. The family would like to thank Infinity Hospice Care for their wonderful care of our loved one.

Hazel Rosettia Laffoon McGraw, aged 88, passed away on October 24, 2020 in Carson City, Nevada. She was born to Lawrence and Jennie Mae Cowan in Blackburn, Oklahoma on March 9, 1932. After her mother&#8217;s death when she was just 6 months... View Obituary & Service Information

The family of Hazel McGraw created this Life Tributes page to make it easy to share your memories.

Send flowers to the McGraw family.