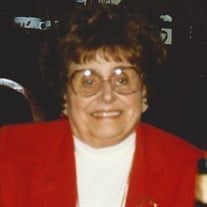 Helen Garguilo Rinauro passed away in Tracy on January 25, 2020, five days before her 102nd birthday. Helen’s mother and her five siblings immigrated from Sorrento, Italy to join her Italian father who arrived in America earlier. Helen was born three years later, in 1918 in San Jose, becoming the first child in the family born in America. She attended school in Campbell and married Paul T. Rinauro in 1938. The couple had two sons, Paul D. and Larry Rinauro. The family farmed cherries and apricots in the Almaden and Willow Glenn sections of San Jose until urbanization of the Santa Clara Valley drew them to Tracy. In 1955, the family established cherry and apricot orchards in the Carbona area, and later began farming almonds and walnuts. In 1961, the family opened a cherry packing and shipping operation which it operated until 1995. Helen ran the family’s packing shed, hiring and managing dozens of women who sorted cherries for shipment. From April to June, the whole family pitched in on the cherry harvest under her supervision. Every lunch break Helen would take her grandchildren next door into her kitchen for sandwiches, Fresca sodas and her famous chocolate chip cookies. She often hosted field trips for school children at the packing shed, sending each home with a basket of cherries. Over the years Helen was active in the Jefferson School PTA, the Carbona Farm Women’s Club, the Tracy Garden Club, the Tracy Women’s Club and the Dansette group that held dances at the Tracy Inn. She enjoyed gardening, needlepoint, reading and spending time with her nieces and nephews. She took great joy in cooking for her family and was known for her pizzas, pasta sauces, canning and the beautiful Italian cookie platters she made every Christmas. Helen was a resident of the New Hope Care Center at the time of her death. Even though she had passed the century mark, most days Helen would put on something with a little pink and make her way to the lobby on her own power for coffee and conversation. The family would like to thank the staff and volunteers for their care during her stay. Helen is survived by her son Larry Rinauro of Tracy; daughter-in-law Michelle Rinauro of Findlay,OH and grandchildren Michael and Summer Rinauro of Stockton; Gina Potter of Tracy; and Christy and Timothy Sinatra of Salem, OR. Also surviving are great-grandchildren Nicholas Parocua, Gianna Potter, Devina Rinauro and Reina Rinauro. Preceding her in death were her husband of 71 years, Paul T. Rinauro, son Paul D. Rinauro, and daughter-in-law Sharon Mancuso Rinauro. A rosary will be said at 10 a.m. on Tuesday at Tracy Memorial Chapel, 5 West Highland Avenue. A Mass of Christian Burial will follow at 11 a.m. at St. Bernard’s Catholic Church, 163 W. Eaton Ave. Interment will be in Tracy Cemetery, 600 E. Schulte Road. In lieu of flowers, donations can be made to the St. Bernard’s Catholic Church Building Fund.

Helen Garguilo Rinauro passed away in Tracy on January 25, 2020, five days before her 102nd birthday. Helen&#8217;s mother and her five siblings immigrated from Sorrento, Italy to join her Italian father who arrived in America earlier. Helen... View Obituary & Service Information

The family of Helen G Rinauro created this Life Tributes page to make it easy to share your memories.

Send flowers to the Rinauro family.