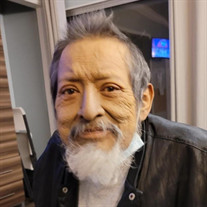 Juan went to rest on Saturday, February 12, 2022. Born March 17, 1959 to Maria & Jose Alvarez in Tijuana, Mexico. Juan immigrated to the United States at the age of 5 to Tracy and gained his US citizenship on September 11, 1996 at the age of 37. Juan was a student at Tracy High School and was part of the band, playing the trumpet and was part of the graduating class of 1977. He was married April 16, 1983 and had two sons. He worked at the HJ Heinz plant in Tracy from the age of 18 until it closed down in 1998, then continued working at Escalon Premier Brands until his early retirement due to health issues. Juan was a good, hardworking, loving man. He loved talking with people, socializing with strangers, eating food, watching his favourite movies on repeat, and spending time with his family. He also enjoyed watching football and was a lifelong Raiders fan. When football was out of season, and sometimes in season, he would enjoy watching NASCAR and Formula 1 Racing. He also enjoyed stargazing with his telescopes, fishing, and all kinds of music- from classic rock to Motown. Juan is survived by his wife Rebecca "Becky" Alvarez; his son Jesse Alvarez with his partner Gail and their children Cresencio, Christian, Cameron, and Jessie; his son Joshua Alvarez; his mother Maria Alvarez; his brother Mario Alvarez and his family; his brother Moises Alvarez and his family; his brother Javier's family; and his two dogs Bandit and Georgie. Juan is preceded in his death by his father Jose Alvarez, and brothers Javier and Francisco Alvarez. Services will be held at Tracy Memorial Chapel, 5 West Highland Avenue as followed: Viewing will be March 10, 2022 at 4pm; Rosary and words for Juan at 6pm. Funeral will be March 11,2022 starting with Catholic Mass at 11am at St. Bernard's Parish at 162 West Easton Ave. in Tracy, followed by final burial at Tracy Cemetery at 501 West Schulte Road. If you would like to send flowers or donate please contact Josh Alvarez at (209) 812-9664, or visit Gofundme.com and search Juan's Memorial and Funeral Fund.

Juan went to rest on Saturday, February 12, 2022. Born March 17, 1959 to Maria & Jose Alvarez in Tijuana, Mexico. Juan immigrated to the United States at the age of 5 to Tracy and gained his US citizenship on September 11, 1996 at the age of... View Obituary & Service Information

In loving memory is Juan Jesus Alvarez, 62, of Tracy California

Send flowers to the Alvarez family.