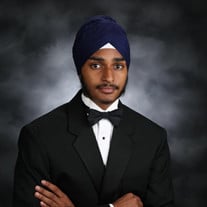 ANNOUNCEMENT: Kamalpreet Singh Sahni, born on June 11, 1999, left us on early Saturday morning August 22, 2020. He was only 21 years old. Kamal was a resident of the Bay Area. He passed away immediately, from the impact of injuries sustained in a car accident off of Frontage Road in Oakland California. LIFE DETAILS: Once again, Kamal was born on June 11, 1999 in Hayward, California at Kaiser Hospital. Kamalpreet Sahni is survived by his baby daughter Milan Faithful Kaur-Sahni, with Destiny Seals - Milan’s mother. Kamal is also survived by his mother Deep Kaur, his father Gurmeet Sahni and brother Jaspreet Sahni. Kamal attended Dublin Unified School District schools where he later played basketball and football for Dublin High School. Elijah, Dom, Ian, Jordan, Big Mike and Kamal were inseparable during their school years. He participated in Young Life Club and Military Boot Camp at 17 years old. After graduating, Kamal enrolled at Las Positas Community College in Livermore, California. He dreamed of someday serving as a Marine in the armed forces, owning his own business and creating a “lavish” clothing line. On any given day, you could find him at the 24 Hr Gym in Pleasanton or at the basketball courts at Fallon Sports Park. He was a handsome and charismatic young man and he knew it! However, life wasn’t ALL rainbows and sunshine, as it rarely is. After graduating, he faced many hurdles and faced those challenges head on! God gives his hardest battles to his toughest soldiers. At a young age, Kamal became a father. He was a proud and loving dad. Always there when Destiny and Milan needed him. Nothing could keep them apart. He knew what his responsibilities were and tried his hardest to meet the needs of his small little family. He wanted nothing but the best for them. They were the driving force to his life. Destiny, Milan and Scooby. He always had a smile that could light up any room. Whatever situation he was in, he always found a way to give a helping hand to those in need. The kind of young man who would LITERALLY take the shirt off of his back and give it to someone less fortunate. He touched many hearts and was loved deeply by all! Thank you all for your continued prayers and support.

ANNOUNCEMENT: Kamalpreet Singh Sahni, born on June 11, 1999, left us on early Saturday morning August 22, 2020. He was only 21 years old. Kamal was a resident of the Bay Area. He passed away immediately, from the impact of injuries sustained... View Obituary & Service Information

The family of Kamalpreet Singh Sahni created this Life Tributes page to make it easy to share your memories.

Send flowers to the Sahni family.