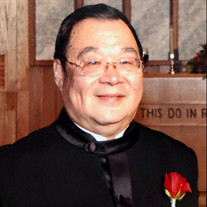 Kelchen Shih, 76, passed away on Saturday, August 15, 2020, at Sutter Tracy Community Hospital in Tracy, CA. Kelchen was born on January 24, 1944, in Chongqing, China to Shih Yu-Shou and Shen Chi-Ying. He graduated from Chung Yuan Christian University in 1969 with a B.S. in architecture. He married Liping in 1971, and they moved to the metro Detroit area shortly thereafter, where they raised their son Ray. He went on to get a M.S. in civil engineering and a M.S. in computer science. Needless to say, education was very important to Kelchen. Consequently, he was instrumental in mentoring Ray throughout his childhood, leading to Ray's graduating as high school valedictorian and attending the University of Michigan. Ray is eternally grateful for his father's tutelage as Ray cannot imagine how much worse life would be as a Michigan State or Ohio State alumnus (thanks, Dad). He was well-known for his infectious smile and compassionate spirit by family, friends, and colleagues. Kelchen had a passion for architecture. He also had a knack for teaching. He worked most of his career as an architect for Giffels Associates, working on highly-visible projects such as the design of the Chrysler World Headquarters and Technology Center. Towards the end of his career, he moonlighted as a professor for the College of Architecture and Design at Lawrence Technological University as recent as 2019. Never one to brag publicly, Kelchen privately showed Ray some of his student ratings throughout the years which consistently averaged over 4 (on a scale of 5). Kelchen was preceded in death by his father Shih Yu-Hou, his mother Shen Chi-Ying, and his sister Ko Li. He is survived by his wife Liping, his son Ray (Janelle), his grandchildren Mo and Camryn, his brother Kelvin (Lily), his sister Hsiao-Mei (Ray), his brother Jack (Teresa), his brother Jerry (Jean), and his brother John (Judy). Kelchen will be forever remembered by his numerous nieces, nephews, extended family members, and dear friends. Kelchen absolutely adored his grandchildren, Mo and Camryn. Mo and Camryn always knew that visiting "Ye Ye" would result in getting toys that their parents refused to buy. He wanted to move from Michigan to California to spend his remaining time near his grandchildren. Over the past several months, Kelchen confided in Ray on multiple occasions as to how much Kelchen appreciated Tom Gammon's (Ray's father-in-law) help in selling their Rochester Hills, MI home so that he could be closer to Ray's family. The result was that Kelchen was able to see Ray's family in-person, even if for a short period. Accordingly, in lieu of flowers, the family asks for any donations to go to the Cystic Fibrosis Foundation, a charity important to Tom and Janelle. At the request of the family, no service will be held in the near future as they will look to celebrate Kelchen's life at a later to-be-determined time when people can gather together safely again.

The family of Kelchen Shih created this Life Tributes page to make it easy to share your memories.

Send flowers to the Shih family.