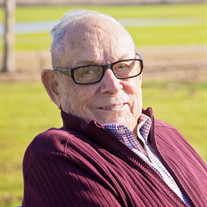 Laurence Leroy Silveira, July 20, 1929-September 29, 2020, passed away on September 29, 2020, at 91. During the final weeks of his life, his family, with the support of Hospice of San Joaquin County, cared for their beloved father, father-in-law, grandfather, and great-grandfather. He was preceded in death by his parents Manuel F. and Nora Silveira, brothers Manuel and Frank as well as his sister Lillian. Losing the love of his life Gloria, known as “Tiny,” after 48 years of marriage, in 2001, he focused on caring for his disabled brother Manuel until his death in 2003. Larry began his is life in Atwater until he moved to Tracy to be closer to his father to help with the family dairy. Later he served in the Army during the Korean War. When he returned, he married Gloria and began his family. While working first for Westside Irrigation and then for the Bureau of Reclamation, he enrolled in Tracy Adult High School to earn his high school diploma later taking courses at both San Joaquin Delta College and Humphreys College. After retiring from the Bureau, he and Gloria traveled to the Azores, Canada, and cross-country several times, enjoying visits with family and the enchanting sights of the National Parks, including Yellowstone and the Grand Canyon. Following the passing of his wife and his brother, he moved to Linden to be closer to his daughters and grandchildren. During these years he visited Reno, Las Vegas, and Jackson. Whether playing his preferred slots or watching his favorite football teams, he enjoyed life to the fullest with frequent breakfasts with his brothers Ron and Ed. Larry is survived by his daughters and sons-in-law, Cynthia and Jesse Becerra and Theresa and Dave Bauer; his brothers and sisters-in-law, Ron and Lorri Silveira and Edward and Carol Jacob; his loving grandchildren Jesus, Michael (Kristine), and Thomas (Amanda) Becerra and Joseph (Isabel) Jimenez and Angela (Jeremy) Jones; and his adoring great-grandchildren Michael, Mikaela, Sophia, Elijah, Oliver, Ophelia, and Vincent. He leaves behind several nieces and nephews. Services will be held at St. Bernard’s in Tracy on Monday, October 19 at 10 AM. In lieu of flowers, please send donations to the American Heart Association at www.heart.org

Laurence Leroy Silveira, July 20, 1929-September 29, 2020, passed away on September 29, 2020, at 91. During the final weeks of his life, his family, with the support of Hospice of San Joaquin County, cared for their beloved father, father-in-law,... View Obituary & Service Information

The family of Laurence Leroy Silveira created this Life Tributes page to make it easy to share your memories.

Send flowers to the Silveira family.