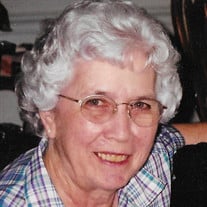 October 28, 1930 - June 27, 2020 Lois Evelyn Whitlock Longtime Tracy resident and businesswoman Lois Whitlock, 89, passed away peacefully on Saturday June 27, 2020 at her home. She leaves behind her husband of 50 years, Raymond Whitlock. Born on October 28th, 1930, in Nevada, Missouri to parents Velma and Alpha Thompson, Lois grew up on the family farm where she lived with her extended family. She attended a one room school house in Nevada and often traveled to school on horseback with her teacher. Lois graduated from high school and worked several jobs including one at a local 'dime store', a garment factory, and at an ammunition factory in Parsons, Kansas to name a few. Lois moved to California in 1960 with her small family where she met and married her husband Ray in 1969. She became a licensed dry cleaner and moved to Tracy in 1980, opening Crystal Dry Cleaners with her husband and family, retiring in 1996. Lois was an active member of the Tracy Chamber of Commerce, Soroptimist International and the Columbian Ladies Auxiliary group. She was a devoted member of St. Bernard's Parish and kept busy as a Deacon's wife, attending many events and social gatherings. Mrs. Whitlock was a friend to all she met, loved by many and cherished by her family. She is survived by her husband of 50 years, Raymond Leo Whitlock; her son Ron Purl Sr. and wife Lesley of Douglas City; her son Roger Wescott and wife Laura of Tracy; her daughter Susan Wescott Wright and husband Paul of Folsom; and her son Joe Whitlock and wife Jennifer of Tracy. She was a loving grandmother, caregiver and cheerleader to 8 grandchildren: Casandra Ruiz, Ron Purl Jr., Robert Purl, Sarah Purl, Lauren Wescott, Bailey Whitlock, Braden Whitlock and Garrett Whitlock. Lois also leaves behind 7 great grandchildren, several half siblings, many nephews and nieces, numerous cousins and extended family. Preceding her in death were her father Alpha Thompson, her mother Velma Lightner, her step-father Steward Lightner, her sister Shirley Thompson and her daughter Cindy Cuellar. The family would like to express their sincere thanks to her caregivers Leti, Loa, and Vasa; her daughter in- law Laura, and her doctors and Life Springs Hospice. They allowed her to be able to spend her final days at home, a home she built and lived in for 40 years. We shall be forever grateful for your kindness and love. Services begin Tuesday afternoon with visitation from 4:00pm to 7:00pm followed by the Rosary at 7:00pm at Tracy Memorial Chapel, 5 West Highland Avenue, Tracy, CA. 95376. A Mass of Christian Burial will be held on Wednesday July 8, at 11:00am at St. Bernard's Catholic Church, 163 W. Eaton Ave., Tracy. In lieu of flowers the family requests donations in Lois' name to: St. Bernard's Pastoral Ministry, St. Bernard's Building Fund, or Life Springs Hospice Care.

The family of Lois Evelyn Whitlock created this Life Tributes page to make it easy to share your memories.

Send flowers to the Whitlock family.