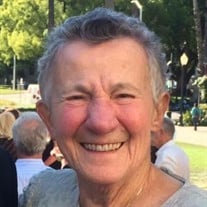 Madeline “Maddy” Anne (Reppucci) Cefalo died peacefully on September 24, 2020 after a long, courageous battle with Alzheimer’s. Born on July 24, 2031 in Revere, MA, Madeline was 89. Madeline grew up in Revere and attended Revere High School where she met her husband Louis. Following graduation she attended Bryant & Stratton College in Boston. She later attended art school. Madeline and Louis married in 1952 and raised four sons and a daughter, in Tewksbury, MA. They enjoyed spending time with extended family, and loved their summer vacation at their cabin in Townsend, MA. In 1971, her husband Louis was transferred and the family moved to San Ramon, CA. Madeline worked as an Executive Secretary for many years at AT&T. She volunteered with the San Ramon Police Department, as well as several other community organizations. Madeline was a devout Catholic, attending St. Isadore’s Catholic Church in Danville. She served as a board member for many years with the Italian Catholic Federation at St. Isadore’s. Madeline loved to cook and bake, even creating her own cookbook, which she passed on as a cherished gift to each of her children and grandchildren. She loved to embroider and knit, making sweaters and afghans for every baby, family and friends. She was an avid gardener, loved to read, make jigsaw puzzles, paint and draw. If you asked her what her greatest accomplishment was, Madeline would say her family. Madeline was a devoted wife, mother, grandmother and great-grandmother. Madeline is survived by her children Kenneth and wife Diana Cefalo, Richard and wife Vivian Cefalo, Ronald and wife Margo Cefalo, Virginia and husband David Guthrie, and Paul and wife Jeanette Cefalo. She is also survived by grandchildren; Melody Cefalo, Christine Cefalo, Joseph and Venesa Cefalo, Kimberly Cefalo, Stephanie and Gabe Curtis, Kyle Cefalo, Allison and Michael Morales, Christina and Zach Aguirre, Joseph and Sarah Guthrie, Matthew and Jennifer Guthrie, Andrew and Lauren Cefalo, nine great grandchildren, and many nieces, nephews and friends. Madeline was preceded in death by her husband Louis, her parents Joseph and Bettina (Picardi) Reppucci, and her sister Caroline Samas. The family would like to thank the caregivers and staff at Astoria Senior Living in Tracy for their love and care of our mom. A memorial mass will be held at St. Bernard’s Church in Tracy, CA on October 23rd. at 11:00 am. In lieu of flowers, the family requests that donations be made in Madeline’s honor to Stanford University, Development Services, P.O. Box 20466, Stanford, CA 94309. Please enclose a letter stating: “the donation is a gift to be used for Stanford Alzheimer’s Disease Research Center.”

The family of Madeline "Maddy" Anne Cefalo created this Life Tributes page to make it easy to share your memories.

Send flowers to the Cefalo family.