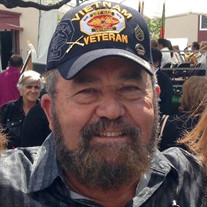 Manuel Dias, a Tracy resident of 48 years, passed away peacefully with his family at his side on Wednesday, December 4, 2019, at the age of 72. He was born June 27, 1947, in Santo Amaro, Velas, on the island of São Jorge, Azores. He was one... View Obituary & Service Information

The family of Manuel Dias created this Life Tributes page to make it easy to share your memories.

Manuel Dias, a Tracy resident of 48 years, passed away peacefully...

Send flowers to the Dias family.