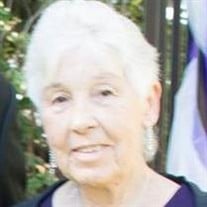 Marilyn Mobley passed away at her Tracy home on Oct. 10, 2019. Marilyn Joyce Mobley was born on January 18, 1945 in Slayton Village, Minnesota. She grew up on the family farm and graduated from Fulda High School in 1963. After high school, she joined the U.S. Navy and served for one and a half years. On December 8th, 1967 she and Lon Mobley were married in Pensacola, Florida. Following their marriage, they made their home in Tracy, California. Marilyn earned her AA degree form Delta College while raising four children. She worked at the Tracy Defense Depot and retired from the Depot after 41 years. Marilyn was a very caring person and was always ready to help anyone in need. She enjoyed spending time with family, taking trips with her grandchildren, and researching the genealogy of both her and her husband’s family. She is survived by her children, Renee Mobley of Stockton, Londa Williamson and her husband Frank of San Jose, London Mobely and his wife Caroline of Tracy, and 11 grandchildren, one great-grandson and four siblings and their spouses, Carol Erickson of Woodbury, MN, Richard and Marjean Cluasen of Bloomington, MN, Darrel and Donna Clausen of King City, MO, and Tom and Kerry Clausen of Cohasset, MN; her brother in-law Max Mobely and his wife Dot Mobley of Tracy, and Don Mobley of Arizona. She is preceded in death by her husband Lon Mobely, her parents, Julius and Lillian Cluasen, her daughter Yvonne Mobley, brother-in-law, Ricard Erickson, sister-in-law Kathy Clausen, sister in-law Gynelle Lenehan and her husband George Lenehan. Funeral services will be on November 9 th at 9 am at Tracy Memorial Chapel, 5 W. Highland Ave. Interment will follow at Tracy Cemetery, 501 E. Schulte Road.

Marilyn Mobley passed away at her Tracy home on Oct. 10, 2019. Marilyn Joyce Mobley was born on January 18, 1945 in Slayton Village, Minnesota. She grew up on the family farm and graduated from Fulda High School in 1963. After high school, she... View Obituary & Service Information

The family of Marilyn Joyce Mobley created this Life Tributes page to make it easy to share your memories.

Send flowers to the Mobley family.