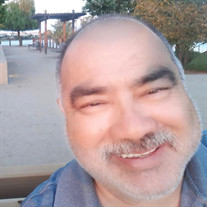 MAY 13, 1957 – FEBRUARY 17, 2022 The Lord took Mario to be with Him on Thursday, February 17, 2022, at the age of 64. Mario was born in Ahuachapán, El Salvador on May 13, 1957. He made California his new home in the 1980’s, where he met the love of his life Susan who he married and fathered 2 children, Sara and Stefany. Mario was passionate about many things in life and loved helping people. He had many dreams to develop a patent on some of the creations he thought of. He went from kite making, to woodworking, and then to creative cooking. He had a dream to own his own business which he accomplished in 2005 when he opened up his own dental lab. He enjoyed making people laugh, but most importantly he would crack himself up when he told a joke. He had the most hearty belly laugh that would make his whole body shake. It is something we could still picture seeing him do to this day. He enjoyed barbequing, spending time with his children and grandchildren, dancing, fishing, watching sports (especially the Warriors), listening to rock music, gardening, and growing his chilis and tomatoes and telling mighty warrior stories about his minchi Wiki. One of his biggest passions was food, whether he was eating or cooking for us. No matter how full he was he always would follow a meal with saying “let’s go get some El Pollo Loco” (his favorite food to eat). He also always wanted to eat soup, even if it was 100 degrees outside. And let us tell you about what an amazing chef he was. He loved to try new recipes to wow his family. His specialty was garlic butter barbequed lobster tails, with steak, and grilled marinated mushrooms. He believed in God and the power of prayer. When something major happened in our family he would tell me that he talked to God and that God answered his prayers. Mario was not rich in money, but was rich at heart and would give what he had to help someone in need. Whether it was doing pro bono work at his lab or helping people make connections to find a job, he was always willing to extend a helping hand. Mario is survived by his wife Susan and 3 daughters, Viky, Sara, Stefany, and 4 grandchildren, Gabriel, Hunter, Sadie and Hope.

The Lord took Mario to be with...

Send flowers to the Portillo-Escalante family.