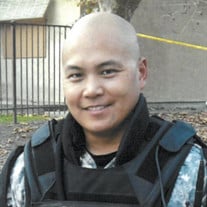 Mark Madamba was 45 years old when he passed in Tracy, CA where he resided. Mark went out on a bike ride with our 9-year-old daughter, Saturday September 19, 2020. They were on their way home when the light switched for their turn to cross over from Eastlake Drive across MacArthur Blvd. in the crosswalk. Mark always had our daughter in front of him but stayed closely behind her. Mark noticing an SUV speeding towards a red light. He told our daughter to hurry and peddle faster to get across the street. She made it to the gutter and fell off her bike. She heard screeching tires and a huge crashing sound. She turned to look for her dad, but he was tragically hit head-on due to the speeding vehicle running the red light. Mark was knocked off his bike and was thrown into a cement wall of a housing development. The driver of the speeding vehicle lost control and crashed into the same wall, totaling the vehicle. Though several citizens attempted to give my husband CPR while waiting on AMR and police to arrive, sadly my husband did not make it. This event has forever changed our daughter’s life, who witnessed this tragedy, and our entire families lives forever. Our family will never be the same, and a piece of our family is now gone forever. Mark’s birthday is August 22, 1975. He was born in Manila Philippines, the only child of Sony Jones. He was raised by his grandmother and uncle before moving to the States with his mother and step-father, Dave Jones, in 1985. English was his second language. He loved football and sports in general, playing football through high school and college, along with basketball and baseball. Mark and I met in 2007, while he was a deputy and I was a security officer at CVHS. We married March 24, 2010 and were expecting a baby girl in October of 2010. Mark’s law enforcement career lasted 11 years, starting with Concord Police Department. He soon took a lateral transfer to the Alameda County Sheriff’s Office. Mark was assigned to the patrol division where he worked as a patrol deputy. Mark held numerous other positions, including school resource officer. Mark had the ability to relate to the students and faculty of the campus’ he patrolled, gaining their trust. In addition to these assignments, Mark also took on ancillary duties as an Evidence Technician and a respected member of the Sheriff’s Office Special Response Unit, also known as the SWAT Team. During his career, Mark had an exceptional impact on those around him. He was respected by all who had the privilege of knowing him. Mark has several certificates, awards, and letters of recognition by Sheriff Greg Ahern. He wore that uniform and badge with honor and the highest pride. My husband was very witty, sarcastic, funny, and absolutely had no filter. What you see is what you get. He was always waiting to catch someone slip up or do something silly; my husband would never let you live it down. My kids and I were all victims to these witty remarks. Unfortunately, I got it the most, and that is fine. He loved Muay Thai, fitness, and always was a very hard-working man both on the job and at home as a husband, father, and grandfather. His biggest soft spot arrived on October 5, 2010: our daughter Ava Hope Madamba was born. I see him in her every day. That was the blessing he left me. Mark is survived by his wife Kelly Madamba, his youngest daughter Ava Hope Madamba, his two sons Niko Madamba, 15, and Dylan Madamba, 12, and his two stepdaughters Meghan, 27, and Sybrina, 25. Mark is also survived by his three grandchildren: Starr Michelle Benson, 5, Roman Kai Martinez, 2, and Laila Rai Bowers, 17mos. Mark has a Pitbull named Maximus (named after his favorite movie 300) and our other dogs we rescued: a Malti-Poo named Gizmo, a Chihuahua named Tinky, and Penny. https://www.tributeslides.com/tributes/show/5G4HZ4RDSKJSQ364

Mark Madamba was 45 years old when he passed in Tracy, CA where he resided. Mark went out on a bike ride with our 9-year-old daughter, Saturday September 19, 2020. They were on their way home when the light switched for their turn to cross... View Obituary & Service Information

The family of Mark Madamba created this Life Tributes page to make it easy to share your memories.

Mark Madamba was 45 years old when he passed in Tracy, CA where...

Send flowers to the Madamba family.