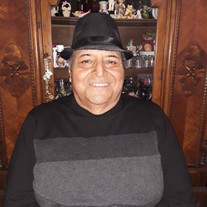 Matthew (Matt) Jesse Palomino, 59, a lifelong resident of Tracy passed away peacefully on Tuesday, January 7, 2020. During his journey home, his mother, Mary Palomino, close friends, and the beloved nursing staff at Sutter Tracy Community Hospital surrounded him. Matthew was born on August 1, 1960 and graduated from Tracy High School in 1979. In his younger years, Matthew played for the Stockton Wheelers basketball team. He had a passion for sports and was an avid fan of the San Francisco Giants and the Oakland Raiders. He will be remembered for his loving commitment to his friends and family, as well as his involvement in the community. Matthew volunteered his time for several community organizations including the Boys and Girls Club, Youth Basketball, Brighter Christmas, and the Tracy Latin Athletic Club (TLAC), in which he served two terms of presidency and was a devoted member for more than 40 years. In his lifetime, Matthew received recognition and awards including the following: Hispanic Leadership Award, California State Senate, the 2013 Inspirational Honoree, Junior Warriors Head Official Award, and the Tracy Hispanic Business Inspirational Award. He is survived by mother, Mary Palomino of Tracy, brother, Danny Palomino, Jr. of Downey, CA and sister-in-laws Lupe Palomino and Cathy Palomino, both of Tracy. He is proceeded in heavenly passing by his father Danny Palomino, Sr., and brothers Ronnie and Rick Palomino, all of Tracy. Many family members will miss him dearly, including one nephew (Carlos Palomino of Tracy), nieces, Auntie Dorothy of Stockton, CA and his godchildren, Nina Palomino (of Turlock, CA), Tiffany Moreno-Magallanes (of Whittier, CA) and Victor Aguirre. Family and close friends are invited to the viewing at 9:00-10:00 a.m. on Friday, January 17th at Tracy Memorial Chapel, 5 West Highland Avenue, Tracy, CA. A rosary will be held at this location at 10:00-11:00 a.m. followed by a funeral mass at 11:00 a.m. at St. Bernard’s Catholic Church, 163 W. Eaton Avenue, Tracy, CA. In lieu of flowers, Matthew requested that all donations be sent to the Brighter Christmas “Bail Me Out” P.O. Box 642, Tracy, CA, 95376.

The family of Matthew Jesse Palomino created this Life Tributes page to make it easy to share your memories.

Send flowers to the Palomino family.