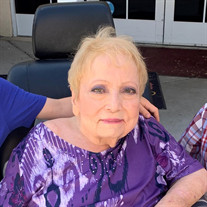 On Monday, October 7th, 2019, Mica Lynne Barrs-Brown, loving mother and grandmother, passed away at 71 years old at Memorial Hospital in Modesto, California. Mica was born on January 20th, 1948 in Armore, Oklahoma to Patricia Ann Barrs and John Price. She grew up living in San Francisco, California, on the Presidio military base, where her mother Patricia was a nurse and her step-father Ken Barrs was a Chaplin. Mica received a bachelor’s degree from the University of Nevada in Reno and had a career as a civil engineer with the United States Forest Service. She met her husband Michael Lewis Brown through working with the Forest Service. They were married on Thanksgiving Day in Corvallis, Oregon on November 24th ,1977. Mike and Mica Brown had a daughter, Amy Brown (Griffin) on November 6th 1979. In Spring/Summer 1980, the family moved to sierra foothills of California where they resided for 20 years. After Mike’s retirement from the Forest Service, they moved to Modesto, California and resided there for 18 years. Mica was an artist and enjoyed drawing and painting. She loved oil painting and also making cards for her family. She also enjoyed collecting coins with her husband Mike. Mica loved spending time with her grandsons and sharing her gift of drawing with them. Mica also had her beloved dog, Rebel, who has settled into a new home with her daughter’s family. Mica was a loving, loyal, thoughtful, intelligent and strong woman who will be missed dearly by her family and friends. She is survived by her daughter, Amy Griffin, her son-in-law Nathan Griffin and two grandsons, Ronan Michael Griffin (Age 8) and Greyson Edward Griffin (Age 5) from Tracy, California, a step- brother, David Barrs and a niece and nephew Jenny Stallworth and Jeff Barrs. A memorial service will be held Saturday, October 26th,2019 at 10:00 am at Tracy Memorial Chapel. A reception will follow on at Journey Christian Church at 12pm. Mica will be buried alongside her husband Mike at the San Joaquin Valley National Cemetery in Santa Nella, California.

The family of Mica Lynne Barrs-Brown created this Life Tributes page to make it easy to share your memories.

Send flowers to the Barrs-Brown family.