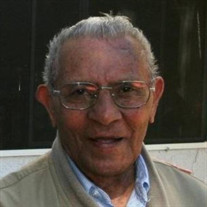 Onesimo Linarez, was 94 years of age when he passed away on September 29, 2021. After a short battle with Pneumonia, Stroke and Dementia he went “Home” to be with his Heavenly Father. He peacefully passed away with his daughter, Cynthia, and her husband, Michael Jacque, by his side at 7:00am, in Murrieta, California, which is located in Southern California. Coincidentally this was the same time he was born 94 years earlier. “Moe’ as he was known to friends and co-workers was born February 4, 1927, in Comstock, Texas, to the late Victor and Macedonia Linares. Married to the love of his life, Ofilia P. Linarez, on July 15, 1946, they celebrated 63 years together until Ofilia passed away on February 14, 2012. Also preceding him was his daughter, Toni Windle; she was forty-one when she passed on March 19th, 1991. Born and raised in Comstock, Texas, he worked at a very young age, for the Texas and New Orleans Railroad Company from 1944 to 1945. On February 5, 1927, a day after his 18th Birthday, Onesimo enlisted in the United States Army at Fort Sam in Houston, Texas. A World War II Veteran, he was Honorably Discharged in October of 1946 after serving overseas including Germany. When he returned to the United States, he was employed by Holly Sugar located in Tracy. He loyally worked there for 39 years until his retirement in 1991. Onesimo loved the San Francisco Giants. His favorite pastime was watching old Bonanza movies, reruns of Little House of the Prairie and of course, his beloved San Francisco Giants. He is famous for his love of Vanilla Ice Cream, Honeybuns and Vanilla Pudding. Survived by his daughters: Sylvia Linarez of Modesto, California. Patricia Beffa and husband Bryon of Tracy, California. and Cynthia Jacque and husband Michael of Murrieta, California. Grandchildren: Kristen Windle-Silva and Fiancé John Van Nieuwenhuyzen, Jonathan Pedersen, and wife Angela. Adrianna Melendez and husband Bojie. Michael Linarez, Sr., and Fiancé Jacquline Hagerty. Quinton Beffa. Shelby Henderson. Brett Golick and wife Lauren and Lauren (Lolo) Jacque. Christina Krug and her husband Paul. Great Grandchildren: Eriyka Allen, Christian Silva and Fiancé Eileena. Emma and Charlotte Mae Pedersen. Aziyah, Jazzlynn, Blue, Tiana and Larae Melendez. Michael Linarez, Jr., Zanyah Linarez, William Krug. Great, Great Grandchildren: Jazlyn Silva. Visitation will be held at Tracy Memorial Chapel on Saturday, October 23rd at 8:45am, followed by a Funeral Service at 9:30am. Graveside Service and committal, will take place at Schulte Memorial Park, 501 East Schulte Road. Lunch will be hosted by the family at El Patio at 12pm-3pm. In lieu of flowers, the family has requested a donation in Honor of Onesimo Linarez be sent to The Lolly Hansen Senior Center, 375 E. 9th Street, Tracy, CA 95376 **Masks are required for those who are not vaccinated and will be available day of service. Thank you for respecting the family's wishes to keep our community safe.

Onesimo Linarez, was 94 years of age when he passed away on September 29, 2021. After a short battle with Pneumonia, Stroke and Dementia he went &#8220;Home&#8221; to be with his Heavenly Father. He peacefully passed away with his daughter,... View Obituary & Service Information

The family of Onesimo G Linarez created this Life Tributes page to make it easy to share your memories.

Onesimo Linarez, was 94 years of age when he passed away on September...

Send flowers to the Linarez family.