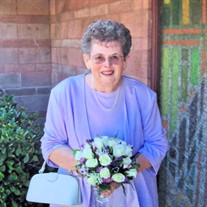 Not sure what to send?

Patricia (Pat) Marie Rogers Brison, age 88, passed away April 20, 2022, at 9:10, with her daughter by her side. Pat was born November 7, 1933 in Oakland, CA, the daughter of Roy Bertram Rogers and Neva Verna Christopher. Pat graduated from Oakland Technical High School in 1951 and from Armstrong Business College in Berkeley in 1953. She then worked for Lawrence Radiation Lab in Berkeley, accounting department, followed by Aetna Insurance in San Francisco. Married David W. Brison in 1956 in Berkeley, they were married for 56 years. After San Francisco they moved to Sacramento and finally to Tracy in 1964. Pat was active in many things: Job’s Daughters in Berkeley, Sacramento Jayceettes, then Tracy Jayceettes, volunteered at North School, was a Brownie and Girl Scout leader and Chairman. Worked at North and South Schools in the Cafeteria for several years, Mc Donald’s 17 years and Weight Watchers 24 years. Pat loved her three Granddaughters and loved to sew for them, did many crafts, enjoyed camping with the family and with their 5th wheel trailer and traveled many places. Pat was preceded in death by her husband David Wilbur Brison, and her parents Roy and Neva Rogers. Pat is survived by her son Terry David Brison (Rose) of Northfield, MN, and her daughter Linda Marie Mellin of San Andreas, CA. Three Granddaughters: Shyanne Salchow (Brandon) of Northfield, MN. Megan Roberts (Devin) of San Andreas, CA and Ashley Mellin and her fiancé Chris Parks of Dixon, TN. Great Grandchildren: Christopher Walter Roberts and Cambrie Christine Roberts of San Andreas, CA. Burial will be private at the San Joaquin Valley National Cemetery. In lieu of flowers, please make a donation to your favorite charity.

Patricia (Pat) Marie Rogers Brison, age 88, passed away April 20, 2022, at 9:10, with her daughter by her side. Pat was born November 7, 1933 in Oakland, CA, the daughter of Roy Bertram Rogers and Neva Verna Christopher. Pat graduated from... View Obituary & Service Information

The family of Patricia Marie Brison created this Life Tributes page to make it easy to share your memories.