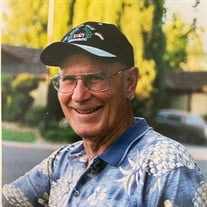 Perry Smith, beloved by all who knew him, left this earth on Wednesday, June 10, 2020. He was a wonderful man who deeply impacted many lives. Perry Mount Smith was born eighty-seven years ago to RC and Veda Smith on Saturday, April 1, 1933,... View Obituary & Service Information

The family of Perry Mount Smith created this Life Tributes page to make it easy to share your memories.

Perry Smith, beloved by all who knew him, left this earth on...

Send flowers to the Smith family.