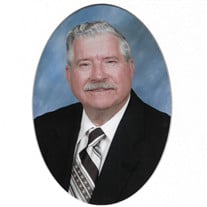 Ray Dell Shipman was born on December 5, 1930 in Illinois. His parents, Andrew Lidge Shipman and Edith McAlister Shipman, raised him along with his siblings during an era of difficult times, surviving tornadoes, flooding of the Mississippi River and as sharecroppers, picking cotton. He served in the Air Force, National Guard and the Reserves from the time he was 17 years of age for a totaling of 9 ½ years. Ray retired in 1988 after 32 years with Owens Illinois Glass Company. Post retirement gave him time for traveling across America visiting relatives, National Parks, and 17 countries. He dedicated himself to helping neighbors, friends, Tracy Interfaith Ministries, Tracy Historical Museum and as an Elder and Deacon at the Tracy First Presbyterian Church. He loved the Deacon position most of all. Ray is survived by his wife of 68 years, Betty Jean and his three sons, Steve (Mary Ann), Doug (Jean) and Bruce; four grandchildren, Matthew (Elizabeth), Bryan, Katie Gagznos (Joe),and Neil (Shannon); and five great grandchildren; a brother, Lloyd (Ruth). He is preceded in death by his parents, Andrew and Edith, his sisters Aline Bise and Lara Lula Shipman; his brothers Andrew, Albert Lee, and Alfred. On May 28, 2020, Ray was fortunate to join his family in heaven. We will miss him and his love of family will carry on with all who knew him. May he Rest in Peace and until we see him again. A Celebration of Ray's life will be held at a later date. In lieu of flowers, a donation in memory of Ray, can be made to Tracy First Presbyterian Church.

Ray Dell Shipman was born on December 5, 1930 in Illinois. His parents, Andrew Lidge Shipman and Edith McAlister Shipman, raised him along with his siblings during an era of difficult times, surviving tornadoes, flooding of the Mississippi... View Obituary & Service Information

The family of Ray Dell Shipman created this Life Tributes page to make it easy to share your memories.

Send flowers to the Shipman family.