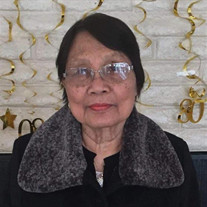 Remedios Tagole-Labuca 83 years old, passed away on Wednesday, May 4 at her home after a 7 month battle with breast cancer. Remedios, popularly known as Remy was born on December 18,1938 in Sumasap, Jiminez, Misamis Occidental, Philippines to Patricia Cobrado and Tirzo Tagole. She has 7 younger brothers and sisters. Susan Travis in Chicago, Il, Arturo who died in the Philippines, Bennie, Dodo, Walter, Irvin and Edna in the Philippines. On October 12,1961, Remy graduated as a working student in Immaculate Concepcion College, Ozamis City, Philippines with a degree in Bachelor of Science in Elementary Education. She supported her college education by tutoring kids. Soon, after graduated from college, Remy moved to Lila, Bohol for a greener pastures and stayed with her uncle and his family. On 1962,Remy landed her first teaching job in formerly Maomawan Primary School, Talibon, Bohol now Maomawan Elementary School,Bien Unido, Bohol where she met her husband. On January 26,1963,Remy was married to Crescencio Abarquez-Labuca in Lila Catholic Church in Lila Bohol and blessed with 8 children. Cherry, Joy, Xerxes, Allan, Llewelyn, Yvonne Giselle, Rainier and Nina. Remy was a very strong, very thoughtful, kind and devoted wife, mother, friend and teacher. She was very supportive to her children, grandchildren, siblings and in-laws, nephews and nieces, friends, relatives, co-teachers and students. Remy was also a devoted grade one teacher for 38 years. She was the head teacher then principal of Maomawan Elementary School from 1975 until she retired in December 2000. On May 30,1992 Remy's husband died after being sick for 12 years. Despite of hardships and difficulties to support her children alone, Remy remained strong and vibrant. She was awarded as one of the most outstanding parents in the municipality of Bien Unido, Bohol. On December 31,2000,Remy immigrated to the US and lived with her daughter in San Jose, CA then moved to Mountain House, CA in 2004. On 2013, 3 of her children and grandchildren joined with her in the US after being petitioned for 11 years. Remy is survived by her children: Cherry & Bobong Dilao of Laguna, Philippines, Joy of Mountain House, Xerxes of Cebu, Philippines, Allan &Sheila of Chicago, Llewelyn &Junior Raquidan of Mountain House, Yvonne &Randy Solas, Rainier & Bibiana of Maomawan, Bohol. Grandchildren: Alcher Jude, Lawrence Jude and Twinkle Dilao. Yuri Estefan and Chloe Nicole Sombreno Labuca. Jewel Marie, Krystal Joan and Garnet PJ Labuca Raquidan. Jeff, Ralph and Jake Labuca Solas. Natasha Monica, April Rose, Wayne Lloyd and Baby Mariah Pogoy Labuca and Zanila Labuca Aton. Brothers, sisters and in laws, nephews and nieces, relatives and friends and extended families: Mary Anne Nasol and family, Theresa & Benjamin Oribello and family, Milagros & Henry Raquidan and family. She is now with God and finally pain free and reunited with all of our loved ones. She will forever be loved and be missed!

Remedios Tagole-Labuca 83 years old, passed away on Wednesday, May 4 at her home after a 7 month battle with breast cancer. Remedios, popularly known as Remy was born on December 18,1938 in Sumasap, Jiminez, Misamis Occidental, Philippines... View Obituary & Service Information

The family of Remedios Tagole-Labuca created this Life Tributes page to make it easy to share your memories.

Send flowers to the Tagole-Labuca family.