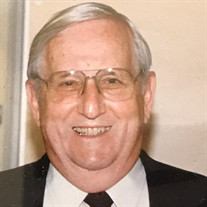 Mr. Robert “Bob” Lloyd Hedrick, 94, passed away in his home at Brookdale Senior Living, in Tracy, California on July 30th, 2021. He was the son of the late Juddy Jay and Stella Leona Parsley Hedrick, and was born March 10th, 1927 in French Camp, California. He attended schools in Tracy, California, where he was an outstanding athlete and later followed in his brothers’ footsteps as the recipient of the Peter B. Kyne trophy. He was drafted into the United States Army shortly after graduating Tracy High School. It was there where he became a Military Postal Clerk, which opened the door to his career with the United States Post Office. During his 45-year career, he rose through the ranks to become the Postmaster of Tracy, California. He retired in 1988, only after being recognized as Postmaster of the Year in 1985. On May 28th, 1961, he married the love of his life, Marie Dell’Osso Hedrick. She preceded him in death on March 25th, 1998 after years of boundless affection and devotion. Bob was an active member of the Tracy Rotary Club for many years, where he also established a scholarship fund in his late wife’s honor. This was just one example of his giving nature. He also was an avid sports fan. As a huge supporter of the San Francisco 49ers, he and his late wife held season tickets, where they also enjoyed their additional love of tailgating together. All who knew him recognize his amazing sense of humor, and the ability to see the good in any situation. Bob is survived by his children: Richard Hedrick and his wife Kathleen of Tracy, Paula Yroz and her husband Steven of Tracy; grandchildren, Matthew Yroz, Lauren Yroz, and Jonathan Hedrick; great-grandchildren, Madelyn and Elijah Yroz, as well as numerous beloved nieces and nephews. In addition to his late wife and parents, Bob was preceded in death by his siblings (and in-laws); Marie Hedrick, Gladys Hedrick, Gertrude Hedrick, Helen Briggs (Merle), Cecil Hedrick (Norma), Virginia Dawson (Carl), Jay Hedrick (Ruth), Gene Hedrick (Polly), brother-in-law, Rudy Dell’Osso (Terry), and numerous beloved nieces and nephews. Viewing will be held at Tracy Memorial Chapel, 5 West Highland Avenue, Tracy, California from 9:15 AM – 10:15 AM. Services to follow at St. Anthony’s Catholic Church, 505 East North Street, Manteca, California at 11:00 AM. Due to ongoing concerns with rising cases of COVID, an additional gathering with be held at a later date to honor his memory.

The family of Robert Lloyd Hedrick created this Life Tributes page to make it easy to share your memories.

Send flowers to the Hedrick family.