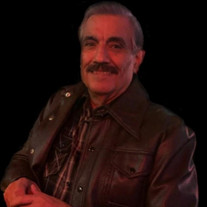 Robert “Bob” Anselmo Anaya was born to Anselmo Anaya and Tomasa Sanchez on February 6, 1948 in Nogales, Arizona. He was a beloved Father, Son, Grandfather, Brother and Friend to many. Bob passed away peacefully on Monday December 28, 2020. He is survived by his children Christina Anaya-Morford, Donna Anaya, Leslyn Anaya, and domestic partner Sybilla Phillips of 40+ years. He will be fondly remembered as “Papa” by five grandchildren; Annaliese, Elyssa, Avah, Vincent and Devin. Bob was a proud Veteran of the United States Army, serving in the Vietnam War. Many can remember him proudly honoring his country by displaying the American flag, speaking of his “brothers and sisters” in uniform, and wearing Veteran memorabilia. Those that live and lived in the same neighborhood as Bob, can recall him posted nightly, in his “garage basecamp”, giving them the sense of continuous security - as if having their own neighborhood watch. Bob was always at a ready stance; even during his Rusty’s visits. Those that had the opportunity to share a drink with him on these routine occasions, can envision him drinking his Olympia beer in an ice filled glass. As the gates of Heaven are opening up for him, we know how happy he must be; to finally be reunited with his Dad and "brothers and sisters" of service he so longed to see. May he forever be smiling down on us all. From those that knew him as Robert, Bob, Dad, and Papa, he will be truly missed forevermore... and as he would always say, "AYEEEE!" A celebration of Bob's life will be held on Saturday January 16, 2021 at Rusty's 320 W. Grant Line Rd Tracy, from 2pm-3pm (All are welcome).

Robert &#8220;Bob&#8221; Anselmo Anaya was born to Anselmo Anaya and Tomasa Sanchez on February 6, 1948 in Nogales, Arizona. He was a beloved Father, Son, Grandfather, Brother and Friend to many. Bob passed away peacefully on Monday December... View Obituary & Service Information

The family of Roberto Anselmo Anaya created this Life Tributes page to make it easy to share your memories.

Send flowers to the Anaya family.