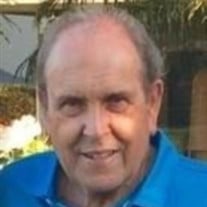 Rudy Dell'Osso was born in San Francisco to Alfredo and Rose Dell'Osso, the oldest of two children. Rudy spent his first years of life in Courtland, CA until the family bought a farm in Lathrop in the 1930's that was adjacent to Highway 50 (now Interstate 5) where Dell'Osso Farms and Dell'Osso Family Farm still run today. Rudy is preceded in death by his parents, his sister Marie Hedrick, his first wife Sharon and his second wife Terry. Rudy loved growing up on the farm. His father and two uncles had houses next to each other and he was raised with his cousins and extended family. All the children attended a one-room school house in Mossdale from Kindergarten through 8th grade. From there he went to Tracy High School where he participated in many sports and was a letterman. The family farm started with growing asparagus, which required Rudy to often be taken out of school to work in the fields. Being part of a large farming family, farm work often took priority over education. But Rudy could speak four languages and was an amazing story-teller who often used all four languages in the same story! After graduating from Tracy High School in 1949, Rudy worked a brief time with the railroad until he enlisted in the army, and was stationed at Fort Ord. He married Sharon Kingery and had three children (Michael, Ron and Annette). After serving our country, Rudy moved his family back to the farm and began growing a variety of row and vegetable crops. Rudy was one of the first tomato growers contracted with Heinz when the company opened in Tracy. Rudy was a proud Italian-American and the first generation born in the United States. He loved Italian food, Italian music and Italian family customs. He was the second generation of his family to farm, and now, the farm is left in the hands of the third and fourth generations which is quite a fete for a family business. Rudy also loved stock car racing and was part owner and member of the pit crew of the #100 race car that ran at 99 Speedway in Stockton back in the 1960's. Up until recently, Rudy still traveled the west coast following the race team that the farm has been sponsoring for years. Rudy was also an avid 49ers fan and held season tickets beginning in the 1970s. Above all, Rudy loved his family. After living in Manteca with his wife Terry he moved back to the farm after her death. He lived on the farm until his last days with his two sons and their families and was a major part of their daily lives. The farm was always his favorite place to be. Rudy leaves behind his three children, Michael (Karen), Ron (Susan) and Annette (Joe). He leaves behind his eight grandchildren, Philip (Christine), Andrea, Ricky (Katie), Robby, Brian (Brittany), Laura (Matt), Melissa (Mark) and Sarah (Smoak). He also leaves behind 11 great grandchildren with whom he so enjoyed spending time with. Rudy was a good man who was loved by many and who will be dearly missed. Rudy's family would like to thank the many individuals that helped him in his final weeks and eased him to his final resting place and eternal home. The family will host a celebration of life in the future at the appropriate time. Please visit www.tracymemorialchapel.com for updates. Arrangements are in the care of Tracy Memorial Chapel, 5 West Highland Avenue.

Rudy Dell'Osso was born in San Francisco to Alfredo and Rose Dell'Osso, the oldest of two children. Rudy spent his first years of life in Courtland, CA until the family bought a farm in Lathrop in the 1930's that was adjacent to Highway 50 (now... View Obituary & Service Information

The family of Rudy Dell'Osso created this Life Tributes page to make it easy to share your memories.

Rudy Dell&#39;Osso was born in San Francisco to Alfredo and Rose...

Send flowers to the Dell'Osso family.