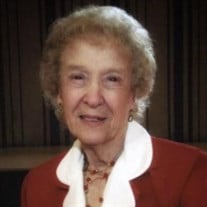 Ruth Briggs, 95, passed away peacefully on December 15th, 2021, after a long and well-lived life. She was deeply loved by her family and will be dearly missed. Ruth was born July 13th, 1926, to Celia and Marcus Fendrich. She grew up in the Bronx, New York, with two Brothers, Murry and Len, and one sister, Lillian. After graduating from high school, she worked as a secretary in New York City. In the fall of 1949, Ruth, along with two girlfriends, ventured to the pier to meet the Navy ship coming into port with hopes of meeting a handsome sailor. Here is where she met and fell for George Briggs. They married soon after on December 17th, 1949, and so began her most cherished career, proud Navy wife and loving mother to her three sons, James, Richard, and Greg. While George was the sailor, Ruth was the family's north star, guiding the way as they navigated the waters of Navy life. Ruth embraced the duty as the family's chief operating officer over several moves to Virginia, New Mexico, Rhode Island, and Key West. Ruth responded to new orders with an enthusiastic attitude and excitement for new surroundings. Filling the gaps left by George's deployments, she dutifully doubled her efforts on all fronts, raising amazing adults, each of whom adored her.  After his military retirement, the family made their way to Tracy, California, where George began his second career as a correctional officer at the Duel Vocational Institute. George and Ruth happily put down roots, buying their first home in which she lived for the remainder of her years. Home and family were her life's devotion. She is fondly remembered for making her family their favorite dinners and having a delicious homemade dessert ready to share. Dividing her time between three active sons, she always found the time to attend their various sports and band activities. Ruth was their biggest cheerleader and constant supporter. In later years she enjoyed doting on her six grandchildren and two great-grandchildren. For over 30 years, Ruth volunteered at Tracy's James McDermott Post of the American Legion Auxiliary. She proudly served as the Auxiliary President for 20 of those years. Ruth logged in a astounding 30,000+ hours volunteering at Livermore's Veterans Affairs Medical Center. Twice a week, often joined by George after his retirement, Ruth made the trek across the Altamont Pass to work in the hospital's Voluntary Services Office. She oversaw the coffee station and enjoyed greeting patients and visitors. She coordinated many events such as Veterans Day parties and 4th of July picnics. During quiet moments she could be found in the hospital ward talking with ill or disabled veterans. Affectionally known as "the boss", Ruth was revered for her dedication and commitment. She received service recognition awards from two sitting presidents. Ruth was an avid sports enthusiast. She loved the 49ers, Giants, Warriors, and Tiger Woods. If someone were to call while one of her favorite teams was playing, she would promptly end the conversation promising to call back once the game was over. It was not uncommon for a football game to be on in the background during Thanksgiving dinner. An avid reader, favoring thrillers, Ruth always had the latest James Patterson novel on the side table next to her reading place. She and George enjoyed vacationing with their children and grandchildren in Mexico, Hawaii, and Alaska.  It is impossible to share all of Ruth's qualities and accomplishments; she was simply one of a kind. She made the world a better place. Our family would not be where it is today if we didn't have Ruth as a wife and mother. We will miss her greatly. Ruth is predeceased by her son James Briggs of Tracy. Ruth is survived by her husband George, her brother Murry Fendrich of New York, her children Richard (Shawna) Briggs of Manteca, Greg (Deanna) of Weaverville, grandchildren Nick (Tiffanie) Briggs, Stephanie (Billy) Wilkie, Travis Briggs, Kelsey Briggs, Sabrina Briggs, and Shawn Briggs, and four great-grandchildren. Services will be held Tuesday, December 28th, at 11:00 a.m. at Tracy Memorial Chapel. A reception in Ruth's honor will be held at the James McDermott American Legion Post 172, 1960 N. Tracy Blvd, at 1:00 p.m. The Briggs family welcomes any and all stories, photos, and memories that Ruth's friends and colleagues would like to offer. You may donate to the American Legion Auxillary Foundation as an alternative to flowers in Ruth's honor.

Ruth Briggs, 95, passed away peacefully on December 15th, 2021, after a long and well-lived life. She was deeply loved by her family and will be dearly missed. Ruth was born July 13th, 1926, to Celia and Marcus Fendrich. She grew up in the... View Obituary & Service Information

The family of Ruth Briggs created this Life Tributes page to make it easy to share your memories.

Send flowers to the Briggs family.