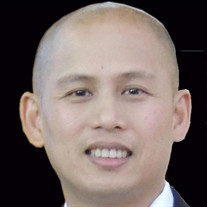 Santiago "Santi" Budlong passed away on June 25, 2021 at the age of 43. He passed away at home surrounded by loved ones after years of battling cancer. The courage, strength, and faith he has shown in these recent years were admirable and will forever be remembered. Santi was born in Santiago, Philippines on August 23, 1977 to Aida and Reynaldo Budlong. As a young adult, he was hard working, determined and self-supportive. He took on several jobs in order to finance his education. Finally, he received his Bachelor's Degree in Electronics and Communication Engineering on March of 2002. As an engineer, he had the opportunity to travel on different parts of the country. In 2009, Santi took a leap of faith and moved to Australia for work. In 2013, he moved to the United States and married Josefina Patague. Together, they had 2 children: Janah and Diana. Santi is survived by his wife, Josefina Patague and two daughters, Janah and Diana. He is also survived by his mother, Aida Budlong and siblings: Ma. Cecilia Fernan, Ma. Concepcion Budlong, and Niño Rey Budlong. Santi was a loving brother, son, uncle, father, husband, and friend. He enjoyed taking his family on trips and exploring new places. He was an active member of the church and a faithful man of God. He made sure to share his wisdom and the words of God to those around him. In his last years, he continued to live life with an unwavering faith. Words are not enough to describe the love he had for his family. Those who knew him are witnesses to his love; he will be greatly missed. " For I know the plans I have for you," Declares the Lord, "Plans to prosper you and not to harm you, plans to give you hope and a future. I will listen to you. You will seek me and find me when you seek me with all your heart." Jeremiah 29:11-13

Santiago "Santi" Budlong passed away on June 25, 2021 at the age of 43. He passed away at home surrounded by loved ones after years of battling cancer. The courage, strength, and faith he has shown in these recent years were admirable and will... View Obituary & Service Information

The family of Santiago Chua Budlong created this Life Tributes page to make it easy to share your memories.

Send flowers to the Budlong family.