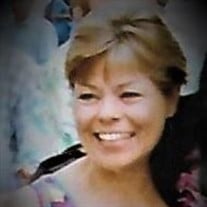 Victoria Lynn (Muhly) Burgess (Vicki, Mom, Ma, Grandma, Gma), age 73, ended her battle with metastatic kidney cancer on October 1, 2020. She passed away at home in Manteca, CA, cared for by family and assisted by the wonderful nurses from Optimal Hospice Care. She is survived by her daughter Shanae Kerr, son-in-law Don and their two children, Kailee and Jamie; and also her son, Rich Burgess, daughter-in-law Cindee and their three children, Charlie, Matt and Holly, who will all miss her deeply. We’d like to think that she is now enjoying a reunion with family she has missed so much since their passing, Johnnie Browe (Mom), Dorvin “Chuck” Browe (Dad), Dorvin Browe (Brother), Stephanie Browe (Niece) and Lillie Houser (Granny). She was a proud Native American and a member of the North Fork Rancheria of Mono Indians tribe since birth. She spoke fondly of times in her youth when her birth father, Victor Muhly, would take her to visit relatives near the tribe’s reservation land in Madera County, California. She attended high school in Hayward, CA, and after graduation she became a licensed beautician. She left that career when she moved to Newark, CA in the early 1970’s to raise her children. In 1986 she moved to Tracy, CA where she managed the garden department of a retail store and then spent the rest of her career working for several bakeries making the most beautifully decorated cakes, she made her daughter’s wedding cake and many of her grandkids birthday cakes. She was kind and compassionate and supported her children as a brownie troop leader, soccer mom, softball mom and field trip chaperon. She was soft-hearted, and my brother and I, and eventually her grandchildren, would take advantage of this when we misbehaved, knowing that if we could just make her laugh she would melt and take it easy on us. Her compassion and love for animals would not let her turn away an animal in need and as kids we would bring home any stray dog or cat that wandered our neighborhood. This is how she gained her first collie and developed such a love of the breed that she would go on to own several more collies throughout the years. Always self-sacrificing, she worked at night as a cake decorator and babysat her grandchildren during the day so her daughter could go to work. She loved all five of her grandchildren and was the grandma waiting to pick them up from school, give their friends a ride home, and take them to guitar or swim lessons. She attended her grandkids school ceremonies and sporting events, took them to see the latest movies (anything Disney or Star Wars was a favorite) and played Animal Crossing, Guitar Hero and Zelda with them for hours (she even had her own gaming system so she could play at her house). A musician and an artist, she played the accordion in her youth and later taught herself to play piano. She loved to draw and painted beautiful land and seascapes. She had the greenest thumb and could grow an 8-foot ficus from the smallest starter plant. She enjoyed gardening and helped many of her neighbors at her community garden when she lived in Sacramento. In her forties, she took up skydiving and earned her certification so she could skydive solo. She was light and took forever to float back to the ground, earning the nickname “sky turtle” from her fellow sky divers. She wanted to travel and see the world and eventually made it happen in her fifties with a trip overseas to Egypt, Paris, Nice and Amsterdam. We will miss her so much and will forever keep her in our hearts and remember her kindness, encouragement and for always providing support and stability when we needed someone to lean on. At her request, no services will be held.

Victoria Lynn (Muhly) Burgess (Vicki, Mom, Ma, Grandma, Gma), age 73, ended her battle with metastatic kidney cancer on October 1, 2020. She passed away at home in Manteca, CA, cared for by family and assisted by the wonderful nurses from... View Obituary & Service Information

The family of Victoria Lynn (Muhly) Burgess created this Life Tributes page to make it easy to share your memories.